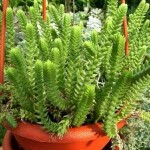 Jade lycopsids – small succulent houseplant -rodstvennik money tree, although it does look it does not look like. This plant is grown as ampelnoe and compositions of succulents different species. 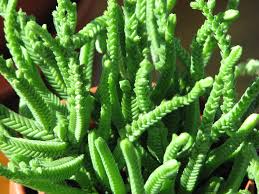 The genus Crassula include more than 300 species of plants in different shapes and nature of growth – from small cone-shaped plant, to large shrub, reaching about 3.5 meters in height.

This plant in the wild is found in Namibia and South Africa and is a low bush without direct trunk – the only species of the family Crassulaceae, devoid of signs typical for him. 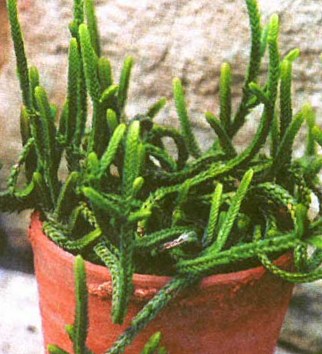 Resulting from branching shoots dense bushes grow up to 20 cm in height, and resemble moss hummocks, it is also called – Crassula mossy. On the lower young shoots are formed aerial roots that absorb moisture from the air. The main escape root and of its lateral points of growth, new stems.

Thin stems completely covered with small scaly leaves. Long and erect shoots directed upwards, but with the growth start to branch out and droop.

Flowering Krasulya begins spring and blooms it immediately plurality yellow-green small flowers with a strong odor. At home, only if the rest of the season, Crassula lycopsids produces buds. After the winter (January-March) on the stems appear small fragrant flowers yellowish. Special decorative value they represent. Flowering lasts no more than 4 weeks.

two versions of the existing Jade lycopsids do not differ among themselves.

In domestic horticulture is much more widespread lozhnoplaunovidnaya, wherein a power branching and unpretentious in care.

Culture effectively looks like a single plant on the windowsill, and if desired, can be combined with other types of succulents.

Note!Songs Jade lycopsids look beautiful in conjunction with other Crassula or cacti that have similar growing conditions. You can choose plants with colorful leaves and shapes, and it will be a good background.

Crassula lycopsids – undemanding plant, which is easy to care for. We need only observe some simple rules of care, and it is easy to adapt to home, will be superb on the windowsill. For its cultivation no need to create a certain temperature and humidity.

Watering should be regular, but moderate. Fine roots of plants can not tolerate drying earthen coma and die, so the land is in the pot should always be slightly damp. Watered soil after the dry upper layer in the pot. In the summer, 2 times a week in winter – 1 time and less frequently, depending on soil conditions.

Usual summer temperatures of 20-25 C content of plants in winter – reduced, but not below 10 ° C?. At low temperatures inhibited the growth of the indoor flower.

plant grows well in a city apartment at normal humidity and does not require its increase. In the hot season, every 2-3 days is useful to spray the plant with water from the dispenser.

Important!The direct rays of the sun should not fall on the shoots. From this, they lose their color and then dry up and die.

Culture requires bright lighting – the appearance depends on the light conditions. With a lack of light the plant will lose decorative effect, weaken and stretch. If it will grow on the southern window sill, then keep a good shape, and its leaves are thick stick all over the stems. If it is put in the shade, the stems are tender. For the young and newly transplanted plants lighting should be diffused.

It is important to choose the right capacity for the flower. Spend transplant in early spring every 1-2 years, in the pot more per 1 cm in diameter than the previous one. The material of manufacture is not important. Capacity should be shallow, but wide. In too large a pot roots can rot. On the bottom of the pot is placed a drainage layer of at least 3 cm to take the excess water into the sump.

Soil for plants picked up the same as for most succulents – loose, nutritious.

Transplant spend handling method, another method to carry out this procedure will not work. Often woven fine roots tightly cover the whole earth com and sprout inside. After the procedure, water the plants and rearranged in the penumbra of 1-2 weeks.

Updated every 3 years flower cuttings, cut from the old plant. In spring and summer cuttings are rooted especially quickly. Older plants lose their decorative effect: shed their leaves, their shoots are beginning to dry up. Tops growth regularly pinch that remained attractive form of the plant.

Well-rooted seedlings can be gradually accustomed to the direct sun. They grow best where for 2-3 hours to get their day sun.

Note!In the summer of flower can be taken in the garden or on the balcony, but that it was not a long time in direct sunlight. Small leaves can get a sunburn, because of what the flower loses its decorative properties.

By fertilizing Crassula applies well. They are best combined with watering in spring and summer. As recommended fertilizer complexes or universal succulents mixture for indoor decorative foliage plants. In autumn and winter flower dressing does not need. 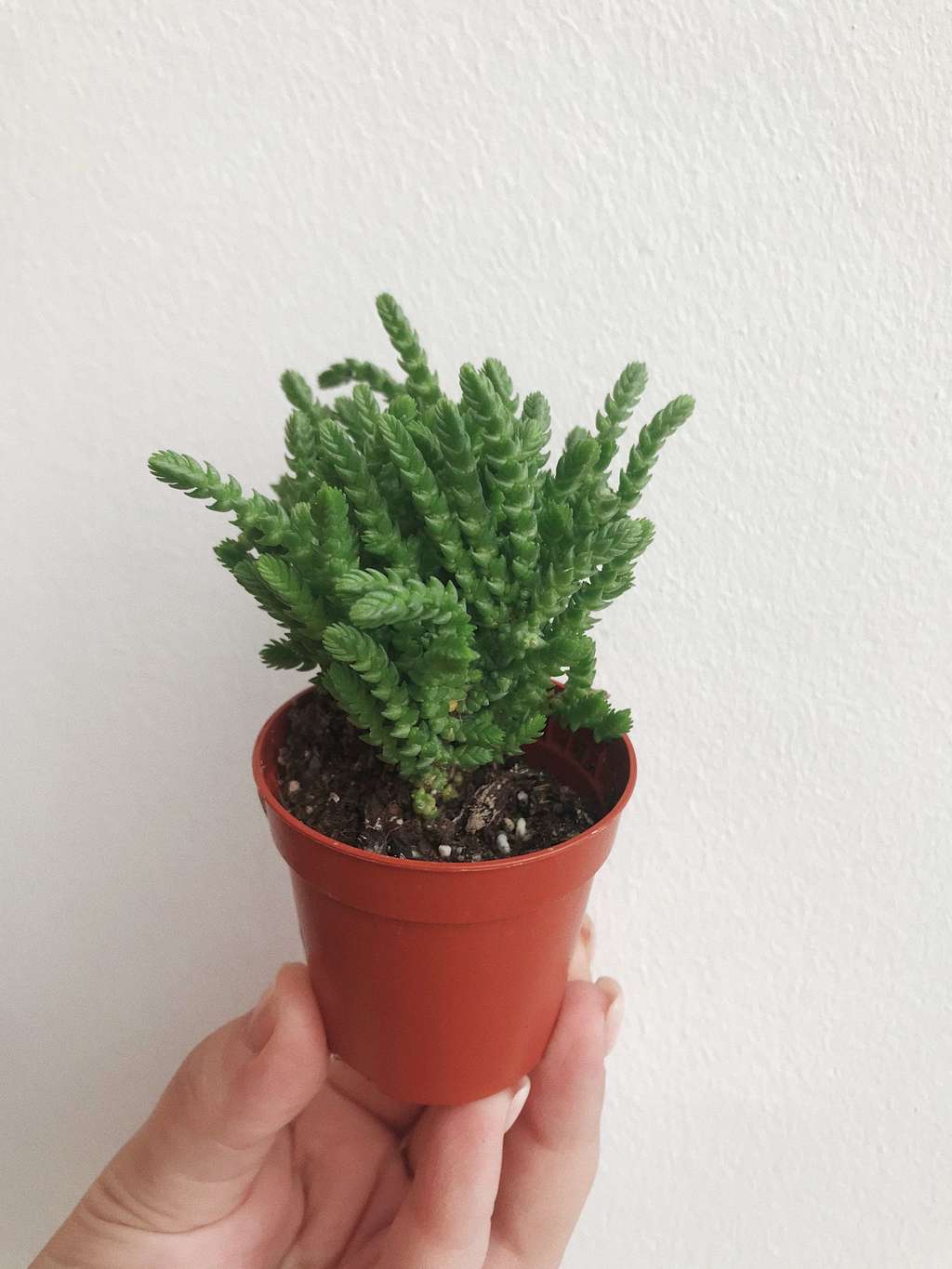 For propagation by cuttings using an escape interval taken from the plant and put it into the soil. Cuttings can be formed spontaneously – the point of contact with the ground stubs are formed. At the next transplanting can be neatly divided into parts bush by the roots and planted in a separate pot.

Special formative pruning the flower is not mandatory, it grows as a compact bushes. Sanitary pruning is carried out in early spring – remove weak, damaged or dry shoots. 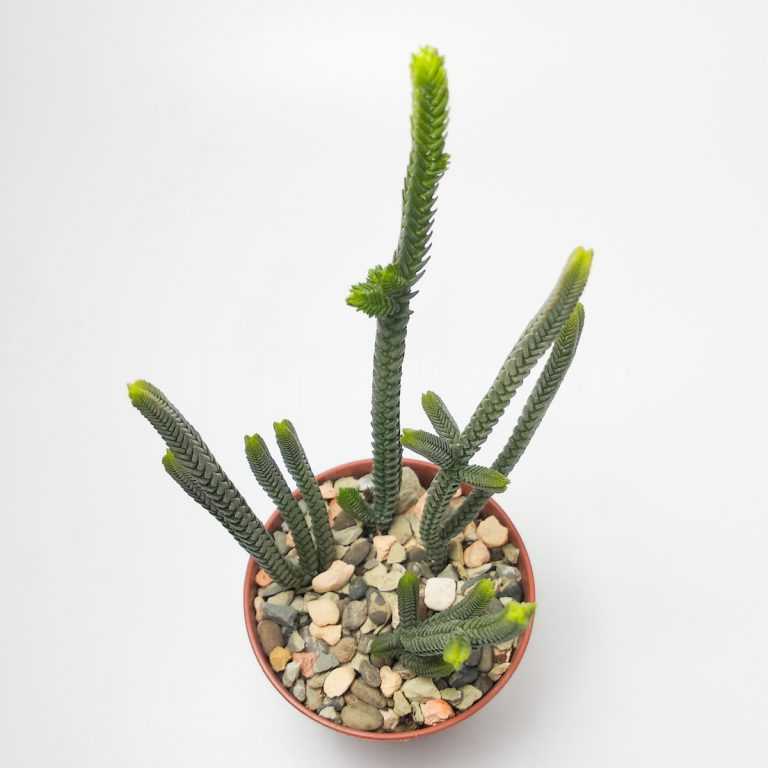 Additional informationYou can adjust the plant, if not satisfied with the form of a bush grower – long shoots are cut, giving the desired shape

Crassula not subject to attack of pests and viral diseases that afflict plants. The only problem – due to excessive soil moisture can rot the root system. The appearance of dark spots at the base of shoots reduce watering and remove damaged stems or plants are transplanted into fresh soil.

The difficulty in growing

Difficulties in growing this plant can arise only from ignorance of the rules of care.

Florist Crassula lycopsids like because it is unpretentious in the care and cultivation.

How to successfully grow cycas (cigarette)?

Selection of houseplants for home

How can you transplant indoor plant