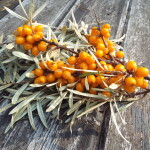 Sea buckthorn (Hippophae rhamnoides) – a unique berry, which is becoming popular among gardeners. This is not only rich in vitamin C in the berries, but also to the fact that it contains oil, the use of which has recently become more intense. Contribution of sea buckthorn oil in the human body is invaluable.

Wild sea buckthorn is widely distributed throughout the world. It is found in Eurasia, the Caucasus, Western and Central Asia, Mongolia and China. It can be seen on the mountain slopes, banks of rivers and lakes. The parks and gardens are cultivated as an ornamental plant.

Varieties of sea buckthorn about a hundred. Densely leafy, prickly shrub of 1do 3 m. Stems silvery-gray or brown. Branches thick, erect. Buckthorn is grown in the form of a tree or shrub. Leaves linear or lanceolate, 3 to 8 cm in length and 7 mm in width. The upper part of the leaves – green-gray, while the bottom side – a silver-gray.

Sea buckthorn – bush is dioecious, ie male and female flowers grow on separate trees. Male trees are more upright, able to bloom heavily and does not form fruits, They are necessary for pollination shrubs female type. Pollination of female flowers in mid-May and is entirely dependent on the wind that carry the pollen of male flowers.

Flowers before the leaves come out and grow at the biennial wood; They appear in the leaf axils throughout the branch. Ripening takes place after about 100 days after pollination. Sea buckthorn fruits vary in shape and color, but usually have a round or oval shape, from yellow to bright orange.

The plant needs a lot of time to begin to bear fruit (6 to 8 years), so the sea buckthorn – a relatively expensive raw material.

Collect the fruit is difficult due to their small size and softness. Fruit – sour, so they are often used to make jams, juices, teas, as well as an ingredient in various dishes.

The cultivation of sea buckthorn and care

At home, the sea buckthorn – undemanding plant to grow. It is heat resistant up to -40 ° C, is resistant to drought and humidity to salty soil. It is able to grow well on all types of soil (stony, sandy, clay).

Note!Seabuckthorn fix atmospheric nitrogen in the soil, so it grows well in soils with low nutrient content, and is often used to fertilize the soil.

In order to grow and be productive, it basically only need a sunny place and permeable soil. However, since it is a dioecious plant-pollinator-pollination is required for at least one male and one female plant. In practice, between 6 and 8 female plants are usually planted in the vicinity of one of the male plants as sea buckthorn are wind pollinated.

Buckthorn do not need to cut regularly to improve the yield, but in any case it is necessary to remove damaged or weak branches. The plant does not need regular pruning to produce fruit.

As a hedge (compact bush or tree low) it can be trimmed to maintain the shape of the bush. Remove parosl aggressive and too low branches to pass the sun’s rays.

Seabuckthorn and its landing

Planting buckthorn does not differ from other landings fruit trees and bushes.

Additional information!Keep in mind that because of the pollination need to plant both male and female plants in the immediate vicinity. It is desirable that the male plants around 6 different varieties of women of fertile plants were planted.

Since this is a relatively high bush in the landing is necessary to maintain the distance between the seedlings at least 2 meters.

Sea-buckthorn seedlings are mostly available in containers so they can be planted all year round, except for the winter and in the heat.

When planting is necessary to dig a planting hole that is two times deeper and wider than the root clump of sea-buckthorn. If the ground is compacted, it is necessary to loosen even greater depth. After planting sea buckthorn should be watered regularly for a few weeks until the plants take root. Subsequently, it will be enough water from rainfall.

buckthorn advantage is that it is not necessary to impart to the stock, so this plant is easily propagated. The most practical way of breeding sea buckthorn – its propagation by cuttings. Buckthorn cuttings are best cut in early spring or early summer. Cut the young shoots of last year’s growth in length of about 15 cm. Insert the cutting into the substrate and leave the room. Keep the soil moist.

After about 8 weeks of cuttings should be rooted, and they can be transferred to the Garden. During the multiplication of planting several cuttings in case some do not accept.

Seabuckthorn sometimes forms suckers which are more suitable for breeding. Such shoots during the growing season are transplanted together with the root directly into the soil in the garden, where she quickly take root.

The collection and use of sea buckthorn

When and how to harvest? Early varieties of sea-buckthorn berries ripen in late July, and late – in September and October. When growing a few bushes, the berries can be easily assembled by hand. The spines of sea buckthorn may sometimes cause some problems, but the young plants are often without thorns. In commercial orchards whole branches are cut off and frozen together with berries and then they are easy to pass into the container. You can use this method and at home.

Additional information!Seabuckthorn long kept fresh, so it is often used in jellies, jams, syrup, and so on. E.

The types and varieties of sea buckthorn

There are three types Hypophae, but the market sold only Hypophae rhamnoides and its varieties (ten). In addition to the sexual genus grades mainly differ in size or color of the fruit, their productivity, vitamin C, and sometimes the size of the adult bush.

The benefits of sea buckthorn

Different parts of buckthorn been used for centuries to treat different diseases. Sea buckthorn is rich in biologically active substances and is therefore used in folk medicine for internal use. Scientific studies have shown that the culture contains a wide spectrum of biologically active substances, including vitamins (A, C, E, B2, K, folic acid), carotenoids, flavonoids, minerals. Furthermore, seabuckthorn fruit and seeds contain monounsaturated acids useful for the prevention of cardiovascular diseases. buckthorn leaves are extremely rich in polyphenols, which are thought to be effective antioxidants. 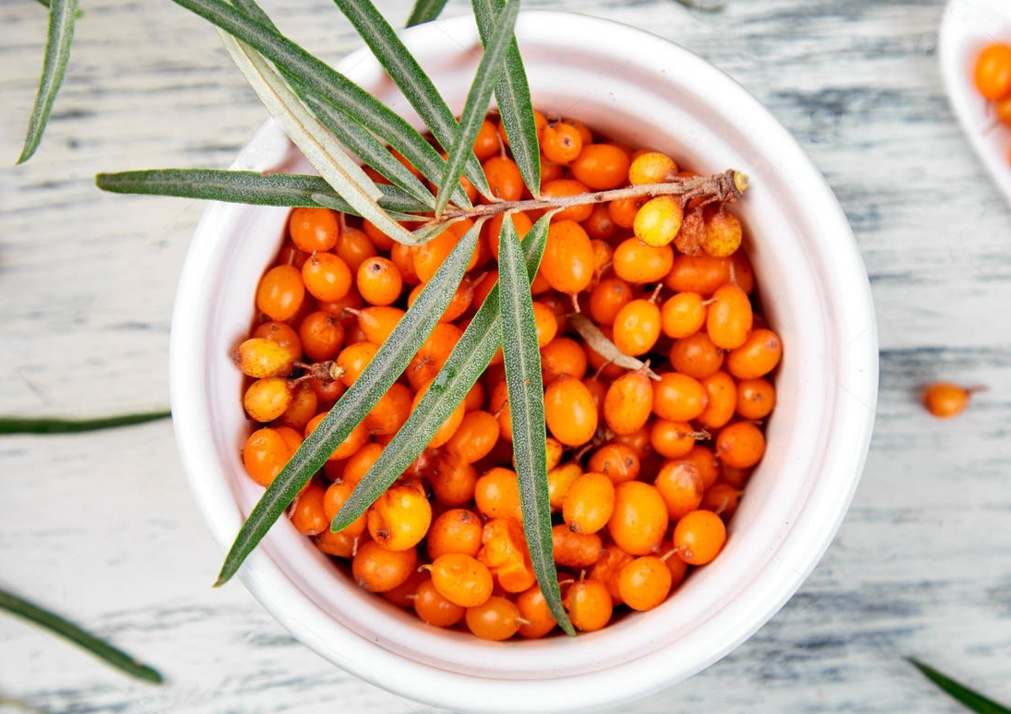 Because of these biologically active substances buckthorn is a valuable additive for the treatment of various diseases, as well as in the prevention and healthy diet:

The oil is rich in unsaturated fatty acids! Ideal for skin care is effective in wounds or burns. 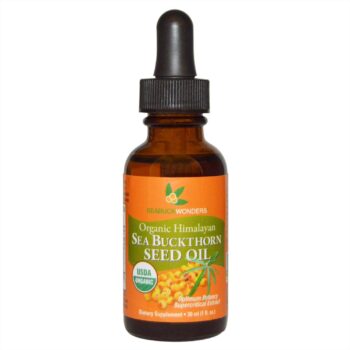 Note!It is necessary to distinguish the sea buckthorn oil, which is obtained from the pulp of the fruit of the oil extracted from the seed. Despite the proximity of the origin of production, their composition is not the same, and the properties vary considerably.

Due to the exceptional level of vitamin E and carotenoids, buckthorn oil possesses antioxidant and anti-aging activity. This helps to limit the appearance of wrinkles and other signs of aging.

Sea buckthorn oil absorbs ultraviolet radiation and, therefore, it is known that it is useful to strengthen the health of the skin, promoting healing after burns or skin lesions. It helps stimulate skin repair mechanisms. Anti-inflammatory and healing properties to improve skin condition.

Sea-buckthorn oil is used in cosmetics to protect against the sun. The high content of omega-3 and omega-6 helps to maintain the elasticity of the skin and restore the hydro-lipid film.