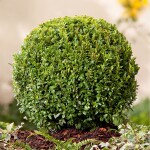 Boxwood (Latin Buxus.) – one of the ornamental plants, which is most common in our parks and gardens as part of a hedge, as well as solitary bushes, which give a different shape. Hedge of boxwood, which many people know under the Latin name buksus, can grow up to 3 meters in height.

Features boxwood. How to reproduce boxwood?

The family of boxwood (Buxaceae) has about 70 species worldwide. All of them are distributed from central Europe and Africa to Eastern Asia in the northern hemisphere. About 20 species are found in Central America. Central Europe is home to the common boxwood (Buxus sempervirens).

Note!evergreen boxwood well suited for hedges and as a curb. In our latitudes it is widely used.

The most common two species: boxwood (Buxus sempervirens) and small-leaved boxwood (Buxus microphylla). Both species are very similar. Boxwood common with age, can reach a height of five to six meters.

In culture small glossy leaves, which are very decorative. Usually they are dark green in color, but there are species with yellow spotted leaves. Leathery leaves, depending on the variety – from round to oblong. Grows bushy and reaches a height of about 4 m. However grows relatively slowly. Shoots thin. The bark of young branches green, the old – light gray. Branching is very dense and compact crown even without pruning. Boxwood is very firm.

Yellow-green flowers appear in the axils of the leaves in April and May. They grow in small bunches, little attractive.

Additional information!The flowers are rich in nectar and therefore attracts the bees.

The cultivation of boxwood

An advantage of the plant is that it does not impose high requirements for soil conditions and moisture. Boxwood can cope with our climatic conditions on their own, only the young bushes need to be protected for up to two years after planting.

It grows in all soils, if they are well drained and not too dry or waterlogged. Very sterile sandy soil with a low pH is not optimal to him. Ideal permeable soil with plenty of compost, lime or clay. If the site sandy soil, when planting should add a bit of mature compost.

The plant tolerates both light and shaded areas, such as under trees. If possible, place should be a little protected from the direct rays of the sun. However, the bush is very robust and can withstand a temporary drought, as his thin, fibrous roots penetrate deeply into the soil.

The best time for planting shrubs – spring, when the ground has thawed. Planted in this way the plants will absorb moisture as much as possible and to actively grow. Leaving the summer or early autumn also suitable for planting. It is important that the plants have time to take root before the first frost. In general, it is not recommended to plant in the cold, but also in the length of the hot weather.

Note!How to create a green wall? When planting a hedge or border, the plant should be placed relatively close to each other.

Seedlings planted in two rows to the bushes alternated. The position of the border mark planting using cord. In the land of make furrows depth of 40 cm and a width of about 50-60 cm. At the bottom is poured gravel, it will serve to drain excess water.

Plantings keep moist until, until they will grow, This evergreen tree requires regular watering, even in winter, except for frost days, when the temperature drops below zero. Fertilize it in early June, fertilizer for ornamental trees.

The biggest advantage of boxwood is that it is very well tolerated by the regular haircuts. Cut made twice a year in spring and summer, in late July. Various compositions may be formulated therefrom. Even a simple cut a novice can make it into a ball, cone or grow on the trunk. If you regularly prune the bushes, they are thick and fresh. The first section of the desired shape made in 2-3 years after planting.

Boxwood may be formed as a small border for a bed or as high impervious fence.

If you need a larger number of plants can be propagated by cuttings in the spring of boxwood.

The main pest of boxwood – boxwood weevil, especially the caterpillars, which can not only severely damage the plant, but also almost destroy it. Therefore, in May and June, it is advisable to conduct spraying to protect plants from pests. If the bushes are already infected, they are removed and burned immediately.

This evergreen shrub also grows very well in pots, and it can be grown as a Bonsai.

Mulberry: Tree Care, Fruit Use
Buckthorn, its properties. The collection and use. Cultivation and Care