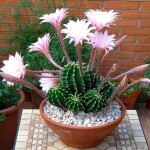 Echinopsis (Echinopsis) – the most well known and popular type of cacti. Among the decorative cactus, Echinopsis are most popular among gardeners. Today presented its wide variety of hybrid forms.

Numerous genus Echinopsis (Echinopsis) cactus family (Cactaceae) is the most famous. In natural conditions, it can be found in South America, as well as in Northern Bolivia, South Argentina, Uruguay, southern Brazil.

The botanical name, which translates to”hedgehog-like” in 1737 suggested that linnaeus.

In European countries, as an ornamental plant, they appeared in 1837. Today, there are more than 130 species of plants, and derived a lot of hybrid varieties, from bright to dark green shades. At the young age of Echinopsis have the form of a small ball, which eventually acquires an elongated shape (from a few centimeters at home – up to 2 meters in the wild).

Presence of fluffy areolas with sharp spines of cactus for sure. Of them begin to form flower tube. The root system is close to the ground surface.

Some Echinopsis reach a size of 30 – 50 cm, depending on the species, the rough size can be very different:. From tiny or up to several centimeters.

Thorns plant is not particularly attractive, but the flowers are pleased with their appearance and aroma. He begins to bloom with 3 years of age. Flowering begins in spring and can last up to six months. Blooming cactus is beautiful and very unusual sight. Beautiful flowers, diameter 8 -12 cm., Located on peduncles 20-25 cm long.

Blooming colorful flowers (white, at least – pink or red) short (1-3 days, depending on temperature), but very effective. After flowering, tied a small oblong fruits that are smooth seeds with a black, shiny skin.

It happens that the long cactus blooms in the home. That he zatsvol, he needs to create certain conditions. For abundant flowering in winter, this plant is necessary to provide a cold temperature. The main thing that the temperature did not fall below + 5 ° C. In such circumstances, Echinopsis”goes to sleep”.

The species of cactus Echinopsis

At home, some varieties are grown.

Echinopsisy very easy to grow. To undemanding plant regularly bloomed, for him to take care of all the rules.

Since he is a native of South America, it prefers sunny and bright place. The best place for growing southern window. During the summer, cacti can be taken from the room, they are very fond of fresh air.

Echinopsis is not afraid of the heat, in the summer it feels good at +25 – + 27 ° C. Since the mid-Autumn must begin lowering the air temperature to 10 + 6 ° C. This will relax and form the cactus sufficient number of flower buds.

Cacti perfectly adapted to the climatic conditions of the apartment and do not need the artificial maintenance of certain humidity. Rigid peel with a waxy coating protects the stem from excessive moisture evaporation.

Important!Alarming cacti, which are formed buds or flowers blossomed not recommended.

The main condition for growing cacti – their infrequent watering. They are easier to tolerate drought small than surplus moisture. Water the filtered supernatant or water at room temperature. From April to September, the plants watered from time to time, and in the winter put in a bright room and not the soil is moistened. During the winter Echinopsis not need watering. He saved up enough moisture to successfully overwinter. Spring gradually accustom to watering Echinopsis.

Important!When wetting the substrate rot the roots, stems may crack.

It is recommended to periodically bathe Echinopsis under a warm shower to rid it of dust.

Soil for Echinopsis must be well-drained, slightly acidic, with a large number of nutrients and humus. During the spring and summer, once a month, the plant can feed the solution of complex mineral fertilizers for cacti and succulents. During the rest feeding is stopped and resumed them only in spring.

The plant is propagated by seeds or rooted cuttings from the side pobegov.Semennoy a better way, from the seeds grow more beautiful plants with bright flowers. Seeds are sown in March in the ground with turf and sand. Seeds are placed in a suitable container and covered with a thin layer of soil, cover with foil. Keep in a warm (+18 – + 20 ° C) place, regularly ventilate and humidify the soil until seedlings appear. Friendly shoots appear in 15-20 days.

Easily propagated cactus spikes (the children) from the parent bush. After the process will be separated, it should be left for a while to dry in the open air, and then planted in a pot prepared.

Processes it is desirable to separate spring. Rooting process takes 1-2 weeks, after which the seedlings can be carefully transplanted to a permanent place. For planting choose a broad and shallow pots.

Cacti multiplied so practically do not bloom.

Note!! Shoots on the bush-consuming power and nutrients to the plant, which negatively affects its bloom. They should promptly clean up

Echinopsis transplanted after 2 or 3 years. Young cactus transplanted often, and adults do not need frequent transplants. Transplant, if necessary, when the root system is not put in the pot. Substrate for planting should be easy, it can be prepared from sand and leaf ground. On the bottom of the pot is poured drainage of expanded clay. 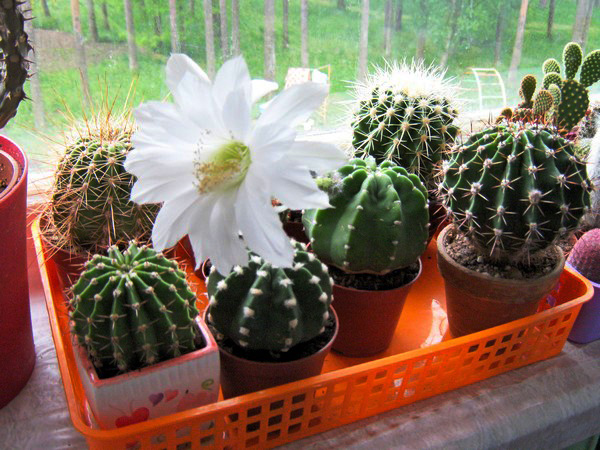 The plant is characterized by high resistance to diseases and pests, but tackle watering regime stagnation of water can occur which leads to root rot.

At low humidity prefers to settle spider mite. It can be recognized by a thin web on its surface. If pests bit, get rid of them is easy. It is enough to wash the plant with a solution of soap. In the case where the processing would be ineffective, can be sprayed or cactus solution fitoverm aktellik.

Various types of cactus grown in greenhouses and botanical gardens in many European cities. Members of the genus Echinopsis its magnificent flowering and unpretentiousness were able to conquer the hearts of gardeners. The best places in the windows they have taken in the collections of flower lovers.

How to water the cactus at home

How to make flower Decembrist at home

Schlumbergera is a room plant