When growing the vine, unlike most other plants, pruning is an absolute necessity. If you allow the vine to grow without pruning, it will give most of their energy of the old wood, and new shoots will remain only a small part of it. It pruning vines affects how much energy the plant invests in the growth and the amount of the crop, and, of course, it also affects the strength and health of the vines.

In the first year cut the main stem of the vine about 3 buds above the ground. Thus, the vine will grow rapidly and mature in the next season. In the second year that the stem will release several shoots. They are removed, leaving only the two best.

You can trim the new shoots during the growing season. Fall leaves most durable and thick trunk, and the rest can be removed completely. By the third year, the trunk, left for growth, will be a major and, in turn, release the stems.

Mainly at pruned vine removal is biennial lignified vines. Part of a two-year wood remains in the trunk on the side. From it grow new shoots.

Last year’s branches are cut as close to the trunk. Old vines can be found on a darker color and greater thickness shoots. Also removed all the damaged, dry and diseased parts of the vine

What is the annual wood? Spring from buds begin to grow young shoots, in autumn they ripen and grow until the final length, gradually changing color from green to brown. At the end of the growing season, these sprouts are considered one-year wood. Next spring at the annual shoots produced more shoots on which the flowers are formed, and subsequently the fruit.

Important!The buds on the two-year and older wood usually give only the leaves and other infertile shoots.

After removing the old vine shoots better poured juice, it gives a bountiful harvest. It rejuvenates the bush and prolongs his life and increases fertility.

Lateral stems, which gave the crop should be cut before the winter. Between shoots leave a distance of 20 cm so that the grapes can develop well.

The principles of trimming

All kinds of crop cultivation and forms are based on the same principles. Once the simple principles will become apparent, the annual crop would be a simple matter.

The main objective of each cutting vines – to reduce the number of annual timber, so that the plant produces the optimum number of clusters. Too many grapes will not have the energy and nutrients for proper maturation.

Left in the vineyard only healthy annual shoots, so that they are as far as possible from each other. Shorten them up to 6-10 knots. These stems are bring the harvest.

On the plant can also keep backup annual shoots, which will ensure the growth of shoots for the next season and to back an alternative in case of injury or illness of the vines. Their shortened to one or two buds. Their task is not to bring in the harvest, and provide spare the growth of vines. They are cut at least 2 cm above the kidney, and is required to obliquely cut, so that rainwater can drain off from the section.

Additional information!A total of 70 to 90% of last year’s growth will be removed each year in both phases of the vine pruning. This will ensure sufficient air circulation and prevent fungal diseases of the vine.

The older and vine stronger, the greater load may be added (number of kidneys). grapes bunches with larger require less load. 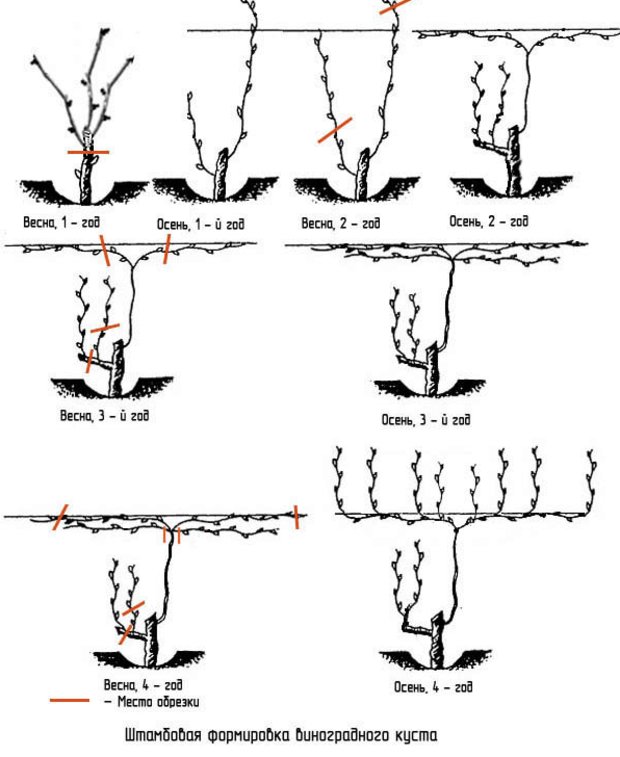 When cut the vine? Winter pruning is carried out with the fall after November – before the beginning of budding spring. This crop is the main and leading. Apply two types of pruning – short and mixed, depending on the variety and its fertility. 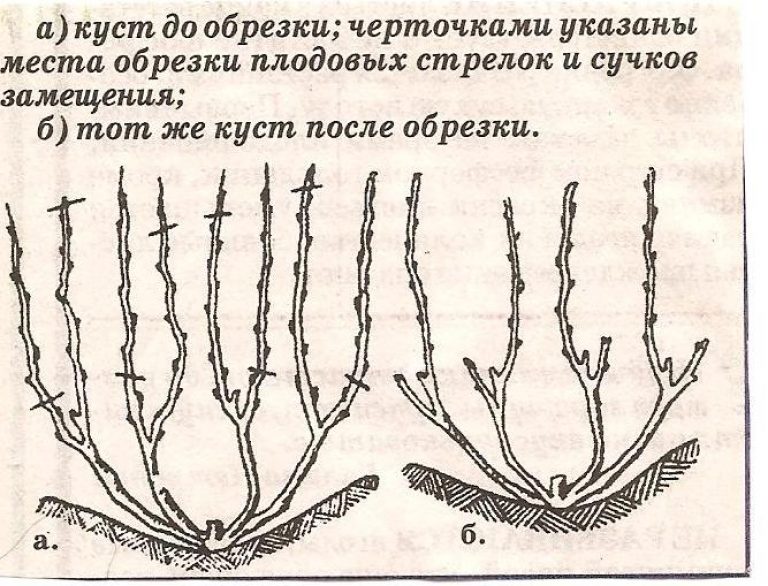 The ideal time for pruning the vineyard – the end of winter, when the grapes are still in a state of rest, and the threat of severe frost (below -10 ° C) has passed. Thus, pruning vines usually carried out depending on the location and temperature conditions of the year. Severe frost can damage the cut parts of the plant, and, conversely, if the crop takes place later, sections of stems juice, and this is an additional burden on the plant.

In winter pruning shortened or removed excess vines. Unlike most other berry bushes, vines bear fruit only on new shoots. Annual shoots grow from a two-year wood.

It can not be cut at strong frosts, as the fragile shoots are easily broken. Complete the pruning should be in mid-March. The exceptions are areas with frequent strong winter and spring frosts, where the end of the vine cutting can be postponed to the last week of March or the first week of April.

When heated the soil to 8-10 ° C roots are beginning to absorb water and nutrients. Then wake up and aerial parts of the vineyard. After the winter cut out from the wounds juice. Excessive juice significantly weaken the bush.

Avoid pruning already green parts of the vine, as such intervention weakens the plant.

Treatment after cutting.The small wound is not necessary to treat. Vine stalks with large sections were treated in the same way as in fruit trees.

During the growing season is good to cut off all the buds that develop at the base of branches. If the side branch developing fruit clusters, this thread is cut to about a second sheet after the cluster. If the formation of several bundles of branches, you must remove all but the nearest to escape. The branches that do not have formed bundles, can be completely cut off. This provides fertile branches of the vine big juicy bunches.

Note!Pruning grapes in the summer should be limited to the removal of unwanted shoots from the trunk, the leaves around the grapes. Summer pruning will ensure proper ripening of the grapes.

Types of pruning and forms of cultivation of grapes

Another object of the grape crop – give it a form of growth, to adapt the vine to the support, and that the vintage was comfortable. There are several forms of creation of the vine, but the basic principle of pruning, as described above, is applicable with slight variations to all forms.

Often used way to harness line, which has a number of advantages. Stems are located far enough away from each other, which contributes to better air circulation, reduces the risk of fungal diseases and is better suited to the vine and its harvest.

The guide branches have several forms. They may have one, two or more strong branches of different lengths and submitted to different heights. It all depends on the age and strength of the vine.

The disadvantage of this form of grape cultivation is a longer time (minimalno.2 years) required for the formation of the trunk and shoulders.

capitate form bush– a common form of vineyard cultivation in the home. It is characterized by thickening of artificially formed at the junction of the underground and overground part of the bush or on completion of the bole. 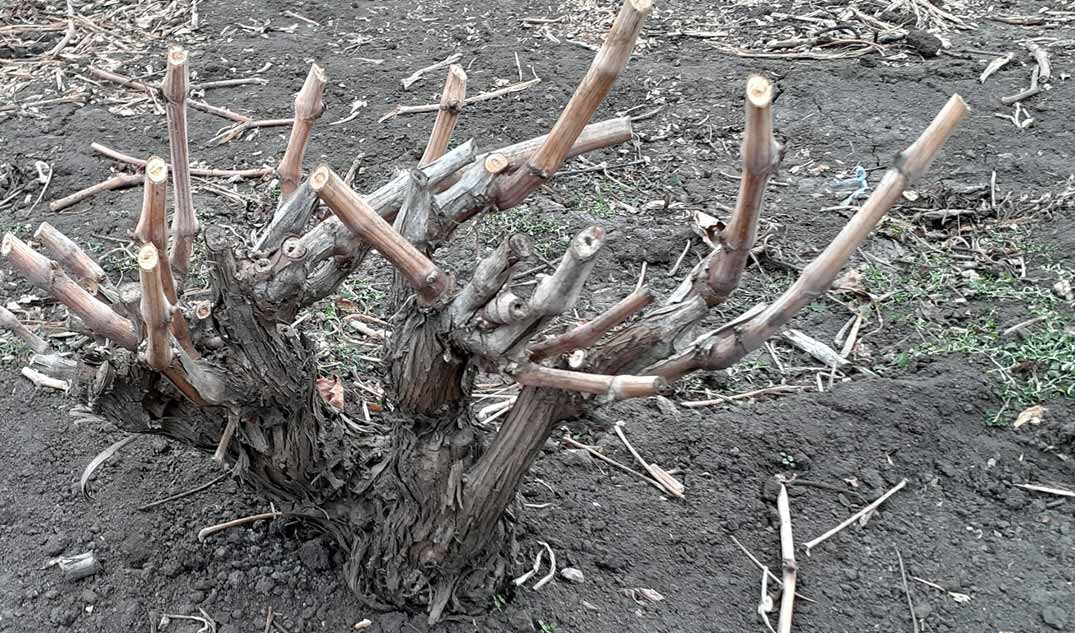 it does not require much space, so you can plant some vine plants closer together. The stem of the vine is about 1 meter, and ends at the top of the so-called head, which grow shoots. Even in this kind of cultivation following the principles of pruning grape vines, which are presented above.

When pruning is left on the plant one or two stems that bend and tie to the wire. This method distributes the line energy and nutrients. In addition to the main stalks in the vineyard, you can leave the bench from which new shoots the following season will grow during the growing season.

lower (pin) line.In this form of growing on vines no trunk from which grow shoots. It is just a few inches above ground level.

For this type of cultivation of vines we do not need the guide wire. All you need is a high stud, to which tie up gradually grow back shoots during the season.

Other advantages of the bottom line are interdigitated small footprint and high resistance to severe frost. Cutting off the vine, leaving two buds, whose main task – to bring the harvest.

In addition to these traditional forms of cropping, there are many other types. The above principle is universal and applies to all forms of the cut. It can apply to any type of vines line. Form growing grapes selected depending on the spatial and climatic conditions, from natural and aesthetic requirements.

The principles of proper pruning vines:

If you cut too much vine, harvest decreases, and becomes thick bush. If you cut the shoots is not enough, you get a higher yield, but will weaken the vine. It is therefore important to maintain a balance between yield and growth of vines.

Groats with fragrant herbs. Growing in the country and on the windowsides