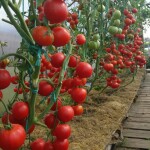 Growing tomatoes in the kitchen gardens are very popular because they occupy a special position among the vegetables due to their properties. Nothing compares to the taste and smell of tomatoes grown outdoors. Tomatoes are not very demanding on the growing, very productive, are available in numerous varieties and, in particular, they offer us a taste of their indispensable, without which our diet would be much poorer.

Tomatoes – heat-loving, curly plants that love the sun and do not tolerate frost. In our relatively short growing season, it is necessary to plant them every year in the form of annual plants that bear fruit as long as they are not destroyed by the first frosts

Easy to grow them. Tomato cultivation success depends on many factors: the selection of tomato varieties, conditions, regular maintenance.

Preparing the soil before planting

To make tomato bushes have taken root, and then grew well, blossomed and bore fruit, you must follow some basic rules for growing tomatoes.

Before planting tomatoes in the garden, you need to prepare the ground for good beds. Tomatoes will grow in any soil type, but they grow best at neutral permeable soils (sandy soil with plenty of organic matter). When grown on heavy, clayey and stony soils, they give lower yields.

The soil must be dug to a depth of 30-50 cm in early spring, adding compost.

Note!Tomatoes should not be grown after the other solanaceous vegetables such as peppers, eggplant or potatoes. They can be grown in the same area every 3-4 years.

Growing your own seedlings of tomatoes lets you choose from a much larger number of varieties. To grow their own seedlings of tomatoes from seed, sow them 6-8 weeks before planting in the garden. Grow indoors at home on a window sill or in the greenhouse. However wants stable temperature of -20-25 ° C, at which the seeds begin to germinate, and at least 4 hours straight sunlight.

Tomato seeds are planted into deeper planting containers (e.g., plastic glasses) depth of at least 10 cm. With drainage holes at the bottom. You can use a standard horticultural substrate. Seeds are sown to a depth of 0.5 cm layer of the substrate and abundantly watered. Keep the ground moist but not wet. Tomato seedlings ready to transplant as soon as it reaches a height of 10 – 20 cm.

Before planting the seedlings need to gradually harden in air for 7 days. Move a few hours a day in a garden in partial shade. On the first day of leave for 2-3 hours, gradually adding time, and on the sixth day, you can leave them outside, even at night.

Planting tomatoes when planted tomatoes on a bed

When to plant tomatoes? Pre-grown tomato seedlings in a room or in a greenhouse (or purchase seedlings).

Plants are heat-loving vegetables, so do not rush to plant them in the air. Tomatoes can be planted in the garden only when there is no risk of frost and when the average soil temperature rises above 15 ° C, which in our case is April-May. The best time for planting tomatoes after 15 May.

The optimum temperature for the cultivation is about 22 ° C. Temperatures below 12 ° C, and above 35 ° C. stops growth.

Seedlings of tomatoes should be planted on a cloudy day, but in the warm soil – then the seedlings will be better accepted. It should be healthy -15-30 cm tall, with 5-7 leaves and a large, healthy root system. Better to choose the seedlings in pots.

Additional information!Tomatoes take 60 to 80 days to produce its first fruits, and most types of tomatoes continue to produce a good crop of tomatoes until the cold weather does not stop them at the end of the season.

Seedlings are planted in beds designated in advance rows, keeping a distance between plants of 35-50 cm (depending on the strength grade growth) Low tomato varieties can be planted closer to each other – at a distance of about 40 cm.

Tomatoes are planted in the prepared holes, planting in them the roots so that they do not twist or break, and then covered with earth, gently kneading her.

With seedlings removed all the leaves that grow below the tops of the upper leaves, and planted deeply. Tomatoes have the ability to produce roots from the stem, and thus strengthened the plant quickly and grow better.

Cover the seedlings with soil, so that the roots of the tomato is not air pocket left, carefully pressed against the ground and watered. The ground support is inserted at a distance of 10 – 15 cm from the plant.

When growing tomatoes perfectly cover the soil around the roots mulch (straw, wood chips, bark and so on. D.), Which protects the soil from drying out, weeds, and the fruits from contact with the soil.

How to tie up tomatoes? Tomatoes can grow up to 2 meters in height, as they form many fruits, which can weigh up to 400 g / pc. Therefore, they need a solid support. It can be wooden stakes. Tomatoes can also be tied to a wire stretched along the rows.

Tying to supports means that ripening fruits will not be lying on the ground, it is better illuminated by the sun and dry quickly after rain. Garter tomatoes also facilitates the collection of fruit and plant care.

Growing tomatoes on the shoots

Tomatoes can be grown on a different number of shoots – from one to three. The most popular is the cultivation of one’s escape. To do this, on the plant remains the only major escape, and all the other leaves, growing at an angle removed. In case of cultivation of tomatoes on shoots two, left main escape and escape growing under the first group of fruit. When growing tomatoes on shoots three further allowed to escape, which has grown from the lower core assembly escape. When the fruits ripen lower escape, removed the lower leaves.

Tomatoes require little maintenance during a time of growth. However, you can increase the fertility of the tomatoes, keeping only one main stem without ramification, taking side shoots. This will improve air circulation around the plants and reduce the risk of exposure to potential pests and diseases. Tomato also send energy to the production of the fruit, not the new branches and leaves.

Pasynkovanie tomatoes – a very important procedure, which, unfortunately, is rarely remembered where tomatoes are grown in the garden. To accelerate ripening removed tip basic escape. Allow 2-3 leaves above the highest flowering ligament. Pasynkovanie tomatoes will allow all the fruits grow and ripen before the cold weather.

The types and varieties of tomatoes

There are thousands of tomato varieties with different shapes, sizes, flavors, textures, colors and fruits, as well as different heights and shapes tomato plants themselves, which are found in almost all corners of our planet.

hybrids of different varieties. Their advantage is the high yield of tomatoes, earlier maturing, increased disease resistance, uniformity of fruit. Most tomatoes that we find in the supermarket, are hybrids. Also, pre-grown seedlings offered by retailers.

Tomatoes are known for their deep roots, which can collect water from a depth of 2,5 m. They require more frequent watering only 1-2 weeks after transplantation. Then they need to be watered only in case of prolonged droughts (once a week). Slight drying of leaves does not bother the plant and does not affect the yield. If you water them too often, the roots do not grow deep, the plant will not be strong enough and will be subject to root rot and various fungal diseases.

Tomatoes are particularly well developed in the soil, nutrient-rich organic substances. Doses of compost tomato without saving when preparing the soil in the spring will be enough for the whole season, so the tomatoes are no longer in need of fertilizer. An alternative to the compost can be well matured manure into the soil in the fall, or the use of natural fertilizers in liquid form during the season.

You should regularly weed the area around the tomatoes.

When using a sufficiently thick (5 cm) layer of mulch, the weeding excluded.

The fight against aphids, moths and various fungal and bacterial diseases of tomatoes is an integral part of the lives of gardeners. Pests and diseases can quickly destroy the entire crop. Many diseases are fungal who prefer moisture and cold. This can be avoided by using the proper methods, can significantly reduce the disease and pest of tomatoes.

Tomatoes usually ripen slowly on the bush. If some fruits ripen too slow, it may be due to frequent watering. Longer droughts and dry tomato leaves, accelerate ripening, so until the end of the season are not watered the tomatoes, the fruits can ripen faster.

Tomatoes grow best in the company of some of the species of plants that provide them with protection against insects: basil, sage, rosemary, mustard and many others.

They can thrive for a few years in the same place in the garden, but in the case of pests, diseases, or soil depletion is recommended to move it to another location.

Buying seedlings have grown tomatoes, choose only healthy plants with dark green leaves. With no signs of yellowing, disease or pest infestation which can infect other plants in the garden. Also, do not buy already flowering or fruit-bearing seedlings.

5 dangerous diseases of tomato and control

Ground cover plants are not in need of special care