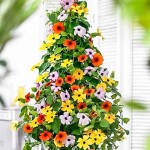 Thunberg – one of the most popular climbing plants for landscaping garden fences, balconies, forming a fence with flowers. It is the botanical name «Thunbergia» in honor of the Swedish botanist Carl Peter Thunberg, also known as «Schwarz?ugige Susanne». This name was given to the plant due to the middle of the flower. Dark Room, which resembles the eye – from dark brown to black
. 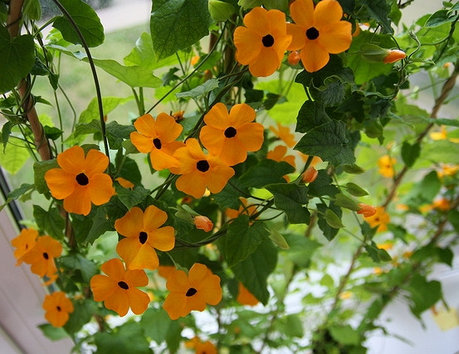 Thunberg originally from South-East Africa. It is an annual plant cultivated can climb the pole or hang cascades. Especially it is typical flowers. which create a beautiful sight for the eyes in the garden, on the terrace or balcony. In our latitudes admire this beauty can be only in the summer.

The best known are varieties with bright yellow color of the flowers. Currently the market offers and other species. The stores available varieties of apricot – to red. This ornamental plant has some simple flower petals.

Thunberg is growing very fast. with an increase of up to 20 centimeters per week. Adult plant grows to a height of about two meters and above. 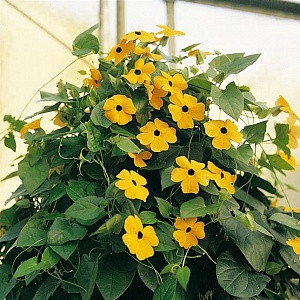 Black-eyed Susan leaves slightly pubescent, have a narrow heart-shaped or triangular in shape and sit on long stems. They reach a length of about seven centimeters and have a wavy edge.

How to grow Thunberg?

Soil should be fertile, rich in nutrients. In their natural habitat Thunberg grows on forest edges, on sandy soils.

Particular attention should be paid to watering climbing plant. Black-eyed Suzanne should be watered regularly, so it does not dry up. Very strong plant should always keep moist.

Important!It is necessary to make sure that did not happen waterlogged because Thunberg absolutely can not stand this.

Thunberg – a plant with delicate leaves and flowers. Lack of irrigation quickly affect the overall blooming. Recommend watering early in the morning or evening to avoid the risk of burning of plants and flowers. 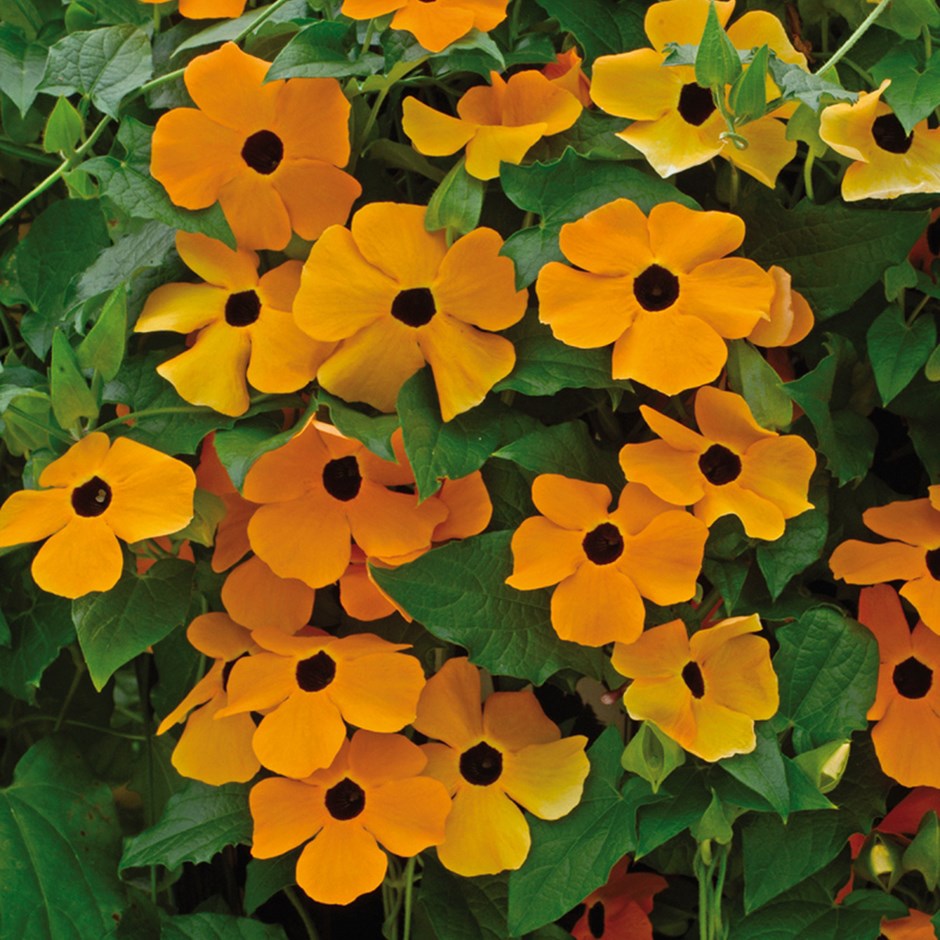 We should not forget the fertilizer. Every two weeks, making fertilizer for lush flowering. Growing in open ground Thunberg requires long-term fertilizer, which contribute directly to the ground. When fertilizer is important to increase the watering because of possible burn plant roots.

Thunbergia rapid growth makes it easy to grow. The easiest way to propagate the black-eyed Suzanne spring sowing. Unfortunately, breeding their own seeds is not always possible, but it’s worth it. In addition, you can buy seeds in specialized stores. You can also trim the upper cuttings from mature shoots in late summer, remove the lower leaves and allow them to put down roots in a well-drained potting soil mixed with sand. After wintering in May next year the young plants are planted in the garden.

Sown seeds in February-April at a room temperature of 18 degrees in the trays, preferably under glass. Seeds are placed in the ground about one centimeter. Germination begins only after two or three weeks.

Small plants are transplanted into pots and cut off the tips of the stems to stimulate their branching. In May, the plant can be moved on the street or on the terrace. The first flowers appear in about 15 weeks after sowing.

Also can be sown in early summer, climbing plant on the street. But as the black-eyed Susan is required for up to four months for the growth and formation of flowers, flowering is delayed until the end of the summer.

Climbing plant blooms and very warm and dry weather, looks like a large cascade of colors. From May to October Susanne opens funnel-shaped white, yellow or orange flowers of three to four centimeters with black eyes. 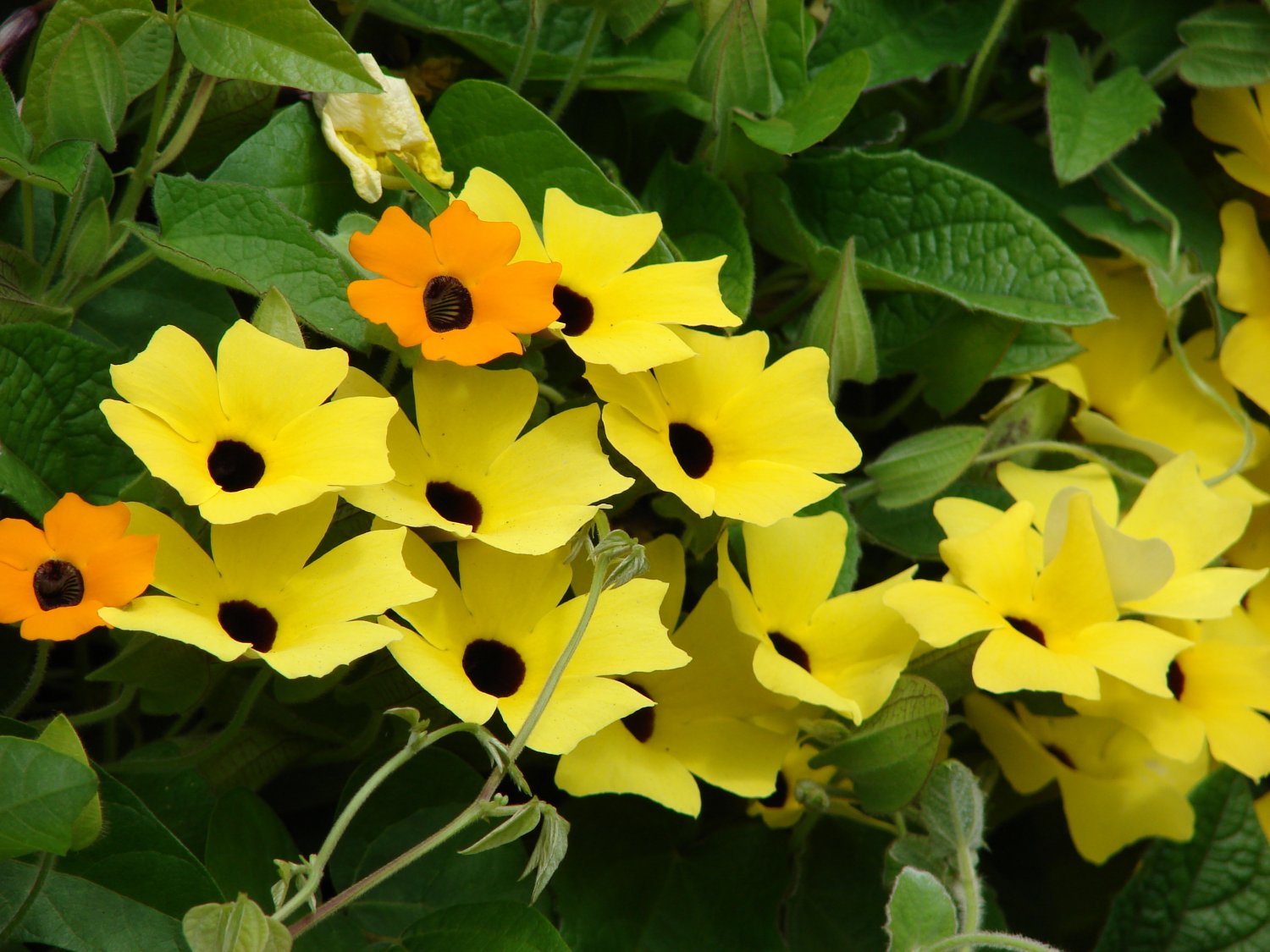 To obtain a dense hedge, you should plant some plants that attach to a trellis, pergola or simple support. Initially, the plants sometimes need a little help for the branch. Young shoots freely fastened to the device with a wire until it stuck. 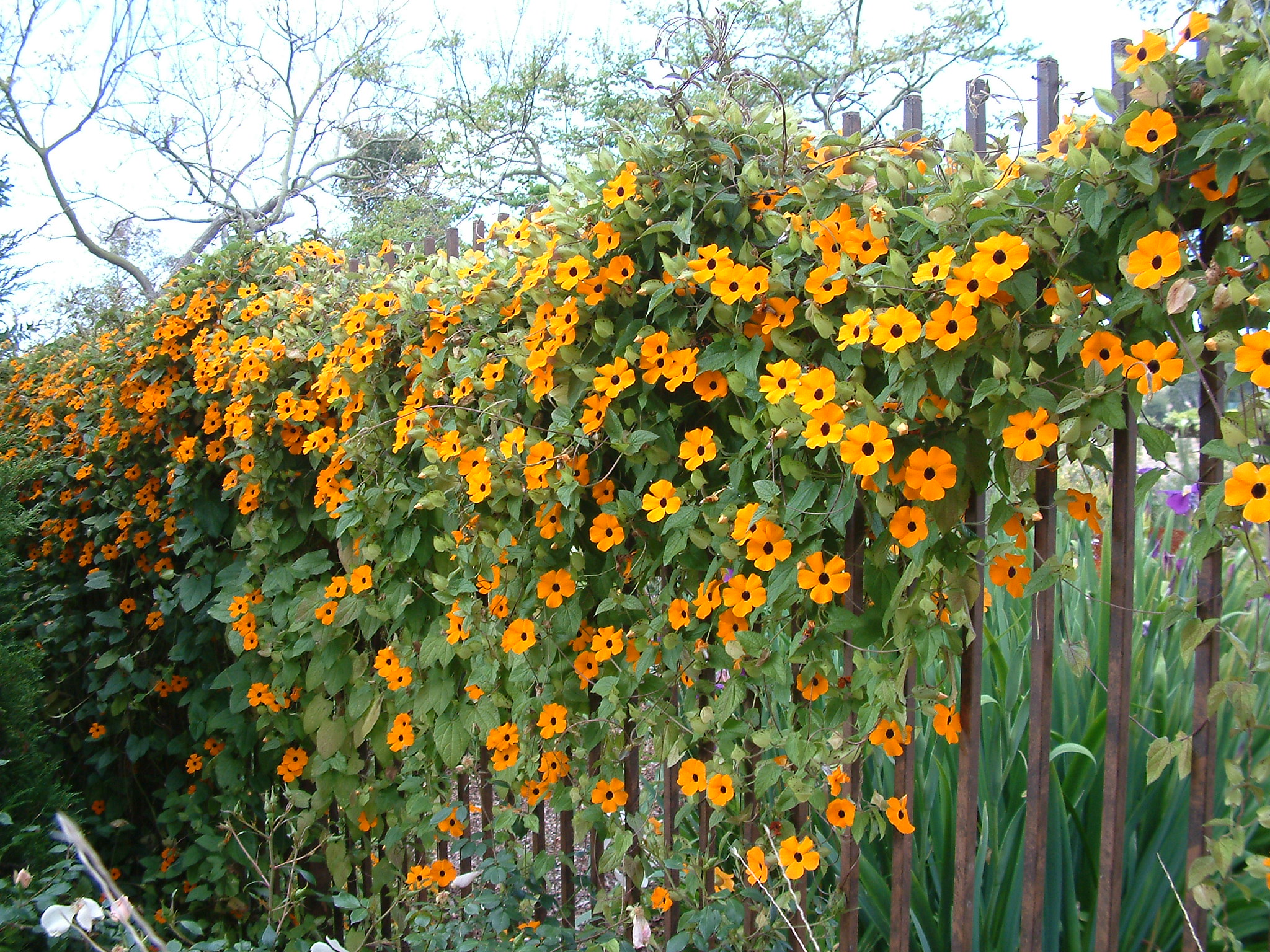 Free runners, stuck to the fence or neighboring plants, gently release and twist around the support. Too long shoots can be cut. Regular pruning stimulates flowering black-eyed Suzanne. It should be noted that the direction of shoot growth is directed counterclockwise. Without support Thunberg becomes beautiful hanging plant.

Black-eyed Susan is not hardy plant, and flowering splendor quickly ends with the first autumn frosts. Annual plant in the pot can be transferred into the house before the night, the temperature drops below the level desyatigradusny and winter in the room at a temperature about ten degrees. In the winter months it should be less watering and fertilizing. In February, the plant heavily pruned.

Additional information!Since Thunbergia alata easy to sow, and it is growing very rapidly, it is usually not necessary to keep it in the winter. In addition, the flowering is often greatly reduced in the second year.

If the black-eyed Susan is constantly wet substrate may be root rot. Unfortunately, in this state, the plant is often no longer possible to save, and it must be disposed of. Suzanne is particularly susceptible to spider mites and whitefly scale insects in the winter indoors, and it should be regularly checked for contamination.