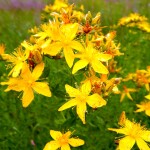 always used herbs for medicinal purposes, with the help of which people get rid of various diseases. St. John’s Wort is also a member of the natural pharmacy. It is used and highly valued since ancient times as a medicinal plant in folk medicine. Scientifically studied herb for medicinal value, and it was proved that she had a lot of useful active ingredients. Flowers and leaves of this plant have on the human body analgesic, antiseptic, digestive, diuretic, sedative and antidepressant action.

St. John’s wort (Hypericum perforatum) -. Perennial plant height of from 30 cm to 90 belongs to the family of Hypericum (Hypericaceae). He comes from Europe, North Africa and Central Asia, but is now spread over almost the entire planet. It can be seen in the wild: roadsides, forest edges, meadows. In our conditions, the plant is also common in the wild.

Stems forming plant, have a straight, branched form. The leaves are oblong-oval. Small flowers with five lepestkamit golden yellow color united in umbrellas. The leaves and flowers strewn tiny dots which are small transparent gland containing red oil with valuable features. Group stamens protrude from the cup in the form of rays.

After flowering developing fruit size up to 1 cm, containing seeds of length about 1 – 1.5 mm.

St. John’s Wort is a plant hardiness and has no particular climatic requirements. It can be grown in one place at intervals of 4 to 5 years.

Its beautiful yellow color, it can revitalize every corner of the garden. It can be grown in the garden in the form of a bush or in a pot, as it does not require any special care, except for the regular watering in dry periods.

Cultivation of medicinal herbs in the garden is still not cause much interest. However, it is very easy to grow using seeds that are commonly found in garden stores or root cuttings in spring or autumn.

St. John’s wort thrives in a neutral or slightly acid soils, in full sun or in partial shade. It has very little power requirements. In the garden soil, usually no additional fertilizer it is not required.

St. John’s Wort is very resistant to diseases and pests. Typically, the problem does not occur when growing.

In botany, the present St. John’s wort is divided into different sub-species, which differ slightly in appearance of leaves and flowers. Known subspecies:

Decorative forms Hyperidum perforatum does not have a therapeutic effect.

St. John’s Wort is currently used to treat a wide range of diseases. St. John’s Wort is a scientifically proven fact as a medicinal plant. In the 1980s, scientists discovered that St. John’s wort has a powerful and effective natural remedy for depression, it helps with all kinds of nervous diseases. It is used herb in the pharmaceutical industry, traditional medicine and cosmetics. In medicine it is used in the manufacture of medicines.

The most important active ingredients of St. John’s wort are hypericin red. It is stored in special glands and can be easily identified by dark spots on the petals and leaves of plants. Hypericin is effective for lifting the mood in depressed mood: calm, helps get rid of the state of fear, anxiety, neuroses and insomnia. The plant also contains hyperforin antibacterial, anti-inflammatory flavonoids that make it effective against viruses, bacteria and fungi. Also present tannins and essential oil.

Hypericum cures from the inside via infusions, tablets and capsules, and also suitable for external application for skin diseases: eczema, burns and in the treatment of hemorrhoids and other skin problems.

Flower extract acts as a sedative, it helps with headaches, rheumatic pains. The extracts also work well for liver and gall bladder, gastric ulcer, urinary tract, as well as against urinating in children. In addition, they accelerate blood circulation and externally serve for rinsing with inflammation of the mucous membranes of the throat and mouth.

It is recommended to drink it at least three weeks to get the effect.

The flowers are used to make St. John’s wort oil. It can be used for the treatment of gastric disorders associated with inflammatory processes. Externally, it is suitable for the treatment of cuts and abrasions, bruises, sprains when, first-degree burns and sunburns, for muscular pain.

Note!The oil is good for dry skin. Sunbathing is not recommended during treatment with St. John’s wort!

St. John’s wort is best to collect at the beginning of flowering. Drying – this is the most perfect, and at the same time, the easiest way to maintain the therapeutic effect of herbs. The upper part, with leaves and flowers (about 20 – 30 cm) is cut and dried in the beams, in shady, air place, but not in direct sunlight. Then the prepared raw material may be cut into smaller pieces to make it easier to store in a sealed jar.

St. John’s wort oil helps with abdominal pain, colic, intestinal problems and lung disease. To prepare the Hypericum oil, dry flowers placed in a jar with a lid and pour olive oil. The mixture is left for three weeks in a dark place. After some time, the oil becomes red. His strained through cheesecloth, wring out well and store in a dark bottle.

Additional information!The cosmetology St. John’s wort oil is widely used as a mask for the face or as a remedy for cracked feet or hands.

Tincture effective with prolonged nervous tension, exhaustion and depression (take 2 months) or at night urination in children (take from 5 to 10 drops evening).

For topical use are used for wounds, ulcers, burns, edema.

2 handful of fresh flowers is poured into a liter of alcohol, is placed in the container or warm sunny place for 3 weeks, shaking occasionally.

Tea from St. John’s wort: 1-2 teaspoons of dried St. John’s wort (flowers, stems and leaves) are thrown into boiling water into a cup, and leave to infuse for 10-15 minutes. Drink three times a day.

Note!St. John’s wort may interact with other medicines.

Overdosing can cause diarrhea and other side effects.

Due to the increased sensitivity to ultraviolet radiation in people with sensitive skin, the use of this drug can cause a reaction similar to a sunburn. Rarely have gastrointestinal problems, allergic reactions, fatigue or restlessness.

St. John’s wort is called magic herbs, besides it look beautiful, and decorate any garden.