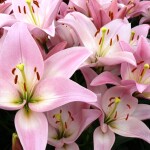 Every lover of flowers knows homemade lily. The oldest garden plants have recently become popular. Lily garden attracted by its appearance – beautiful fragrant flowers and large. Their cultivation is easy and almost always successful. Large flowers suitable as cut flowers for the vase. Some varieties have a strong smell.

The genus includes about 100 lukoobraznyh species that live in wooded and grassland areas of Europe, Asia and North America. From the bulbs sprout direct branching escape. Along escape form glossy green lanceolate leaves.

Plant height depends on the specific form. Depending on the kind of lily have a height of from 30 cm to 2 m., One or several flowers are formed on the end of the stem, which are combined in a brush or umbrellas. There are three forms of flowers: tubular, cup-shaped flowers and Turkish roses, whose flower resembles a turban. Lily flowers are often composed of 6 curved petals and prominent stamens. The petals can be of all colors, except blue, from the plain to the spotted, striped.

Flowering different types of accounts for the period from May to September. Represented in almost all colors except blue. After flowering, fruit ripening (brown capsule) which contain numerous flat seeds. Aerial parts (leaves and stems) are killed after ripening.

Recently added new and often much more attractive varieties of these beautiful flowers, which are more suitable for the garden.

Botanically lilies are divided into several groups. The most famous are the Asian hybrids, Oriental hybrids, Longiflorum hybrids tubular and others. Tubular and Asian hybrids most cultivated in our conditions.

How to plant lilies? Care and reproduction

Most roses like well-drained, nutrient-rich, slightly acidic soil. They like places with full sun, but they appreciate when the soil above the root zone is shaded. As a result, it does not overheat in the summer and does not dry out too quickly.

Soil should be well permeable to water, ideally enriched leaf compost. Special pH value is only required in exceptional cases. Most species and varieties can cope with neutral or slightly acidic soils. Before planting, you need a good place to enrich the humus (never add fresh manure), and a layer of coarse sand is poured on the bottom of the landing pit. Drainage prevent bulb rot due to excessive accumulation of moisture.

Some species of lilies (Candidum hybrids) prefer a more alkaline soil (tubular hybrids), others slightly acid soil (Asian hybrids). Therefore it is expedient to prepare the ground where necessary.

Most lilies like sunny places, but they will thrive in partial shade. It should be taken into account if the stem are in the sun, the roots must be shaded by other plants or covered with a thick layer of mulch.

Too deep shadow is not suitable, because the lily blooming lose their ability, are drawn to the light. Lilies grow well both in the lowlands and on high ground.

Dry and rocky soils are not suitable for roses, as well as wetlands, too alkaline or highly acidic soil. They bloom profusely in the permeable and slightly damp soils.

Lilies bloom around May, continue until July. For late spring planting bulbs flowering time postponed to the end of summer.

Lilies attracted attention in mixed perennial plantings, in small and large groups, between flowering shrubs. They should be placed on a bed in the middle, and low grade longer in the foreground.

Lilies should stay in one place for at least 5 years, then it is desirable to change them to a different location. They also grow very well and bloom in plant containers on balconies and terraces. Lilies, dug in the garden, not suitable for growing in pots,

Transplanting is recommended after a few years, when the power of lilies flowering significantly reduced. Bulbs are planted in the fall and early spring. In the autumn planting in September, spring planting – in March.

Lilies can be transplanted after escaping withered. Bulbs for planting carefully pull out from the ground, autumn does not need to collect onions from the soil. They are stored in one place for 3 years or more.

Inflorescences are cut immediately after flowering. Only when it is necessary to collect seeds and allow them to ripen. Sheet portion of the stem remains and only when the leaves are completely dry out, cut off the stem above the ground. The rest of the bulbs with roots dug out only in the spring.

Area covered with a bulb or mature fertilized soil compost biennial about five centimeters in height. In early spring, before the appearance of flower buds, lily they are provided with nutrients.

Note!In comparison with other bulbous plants, such as tulips and daffodils, lily bulbs do not have a hard outer shell. They consist of individual fleshy scales. In some species, the roots are formed at the root, at the base of the plant.

Lily bulbs should always be planted too shallow, at a depth of about 20 cm. It is best to plant lilies groups. In one well, to enhance the effect on flowering time, should be placed at least three bulbs.

After planting abundantly watered place in the flowerbed. When growing roses in the garden, they need to be watered regularly during plant development and flowering. Watered intensively in the days when it’s warm, sunny and dry. One must be careful not to pour the roots, because this may cause them to rot. Since the bulbs of lilies do not tolerate waterlogging, good drainage is necessary when landing.

Healthy growth and abundant flowering should be supported with fertilizers. It is also worth several times to feed lilies in beds during the growing period of the multi-component feed.

It is advisable to start in the first days of April, when the stem is formed with the kidneys. You can even buy special fertilizer for bulbs, which contains an ideal balance of phosphorus and potassium. The nitrogen content should not be too high. One or two they get fertilizer during flowering. It is recommended to use a liquid fertilizer. After flowering feeding is no longer needed.

It is easy to propagate lilies yourself from healthy plants, because they breed well. All methods of simple in design. Get new plants several techniques:

After flowering stalks wither and dry out quickly. Lilies sprout again next year. Over time, the bulbs form the “kids”. After flowering, the stems as easily off the ground they can be transplanted. Onions are dug, separated and put in separate wells for 3-4 years.

Getting bulbs of scales – is the fastest and most convenient method of reproduction. From one bulb, you can get a lot of new plants, as many lilies can grow even on the part of the scale.

Important!to get new lilies from scales, it is necessary to choose a sufficiently large bow.

Lilies of the stem bulbochek – this is a very convenient way to quickly get the bulbs. But, unfortunately, not all lily on stem form pochkolukovichki.

The method used for grafting propagation of grades when little starting material. For grafting using the stems, and leaves.

Note!For those who wish to plant bloomed quickly, buying high-quality bulbs is a good option.

When purchasing you need to focus only on larger, intact and healthy bulbs, with no signs of mold.

What are the lily, which species?

There are about 100 species of lilies, which are spread throughout the world. Well-known varieties of lilies:

Of these and other lilies appeared countless crosses, which are almost all colors except blue.

Most garden roses belong to this group. Asiatic hybrids reach a height of 90 to 100 cm and have straight, flat, star-shaped flowers. Typically, each plant produces flowers of more than 5 up to 14 cm. Flowers disclosed in June or July. They have bright colors and show contrasting patterns.

Oriental hybrids – a variety that is mainly cultivated in Japan. They bloom in two to three weeks later than the Asian lilies. They generally have from 3 to 5 flowers whose diameter reaches about 20 cm. Flowers wide. They are not as bright as Asian lily flowers have white, yellow or pink. Oriental lilies are good for cutting. The vase they cost 10 to 14 days. It blooms in July / August, later than Asiatic lilies.

Hybrids result from a cross between oriental hybrids (O) and lilies tube (T). These varieties are quite high. They are bright, large, pendulous flowers.

LA lily are the result of crossbreeding between Asiatic hybrids (A) and forms the group of Lilium longiflorum (L). They are similar to Asian lilies, but have larger flowers. Plants reach a height of over a meter and have five or more flowers. In general they are grown for the production of cut flowers.

Garden lilies totally hardy and do not need winter protection.

The viral disease is incurable at the lilies. Plants destroyed to prevent the spread. As a preventive measure against diseases lilies they should not be planted too densely.

Snails, lily beetle larvae devour the buds and leaves. Voles eat the bulbs. Against mice can be planted among the lilies daffodils, which rodents scare her scent.

Today lilies adorn many parks and suburban areas. For a lush flowering of these beautiful plants is proper planting and care.