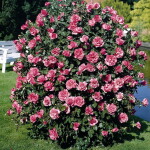 Bushy rose, with abundant flowering and attractive appearance – this rose shrabov class. They may look like members of other classes, while remaining unchanged in only one – form a plurality of the shoots on which the flowers are formed
. 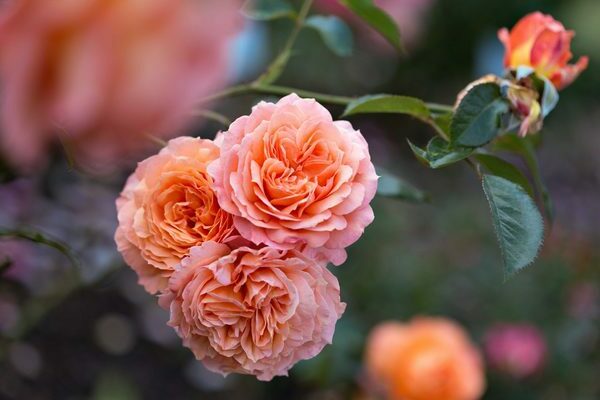 Roses shraby what is it? Abundantly blooming polupletistye and shrub species are composed of varieties of different heights. Shraby can be found under the title”modern park roses.” Some of the most cultivated species in many countries, they are used in the improvement of parks and private areas. Roses can easily tolerate the cold winters. 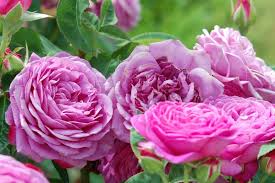 Height of roses can be different: the maximum can be up to 3 m. have stunted -. 50 to 90 cm For the season climbing roses can grow to 1.5 meters, forming a beautiful voluminous bushes. Due to strong growth on shrubs quickly grow new shoots on which the flowers appear. As a result, such a rose perfectly suited for horizontal and vertical planting. 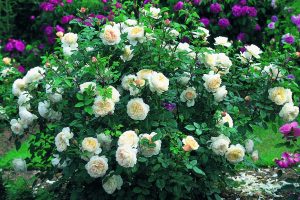 The number of varieties-shrabov roses there are dozens. Depending on various factors, they are highlighted in the informal groups:

Rose-shraby characterized by a continuous flowering, which begins in early June and ends when the first frost. Its high decorativeness shraby may be similar to the hybrid tea, floribunda group and vintage. They are distinguished by a profusion of flowering, with multiple flowers and petals shades – from pastel to the darkest stains. Most of them are characterized by multiple (repeated) flowering. Its flavors are in some ways even superior hybrid tea roses.

They can bloom until the fall, you only need to trim them properly stimulating the emergence of new buds. But in this class also have varieties that bloom once.

In areas with severe winters produce Canadian varieties, so that the beauty of roses is available not only in a mild climate. Even if they are frosted, recover quickly due to the rapid regrowth of new shoots.

Shraby and park roses what is the difference? Plants are much easier to take root and are very hardy to a different kind of disease, and thus do not have a lower value than a decorative park roses such as floribunda, hybrid tea variety.

Shrubs can be both small and large, krupnotsvetuschimi and small buds. Often they are used for decorating the curb.

Additional information!the form of their colors and variety of colors shraby no different from other species. The difference between them is that they are not suitable for cutting buketnye.

The characteristics of species and varieties

Not demanding of care, well take root in all weather conditions have been withdrawn a large number of varieties of roses polupletistyh shrabov.

Growing roses-shrabov is seamless. Care is regular watering, pruning and preparing for winter. They can be planted in groups of a few bushes, and in single crop. They help to create flowerbeds and decorate small corners of the yard or garden. Polupletistye grades may require supports. 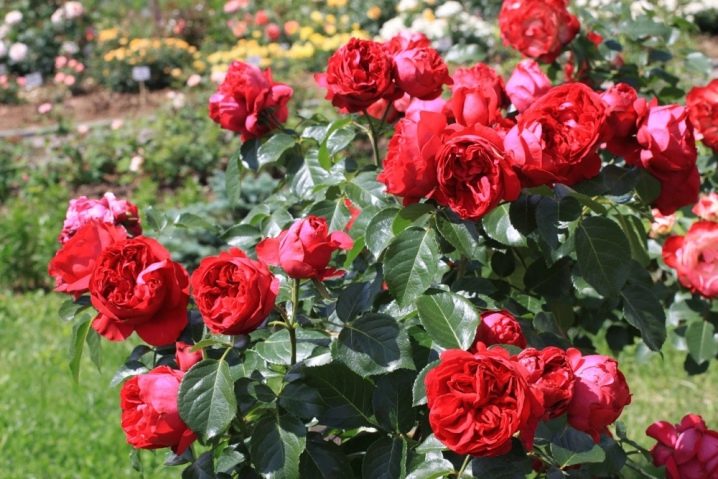 Fall planting has advantages over the spring. In the autumn the plant has time to take root and grow strong, and spring quickly go to the growth. Those who do not have time to plant roses in autumn time, it is better to postpone the event until the spring. They need prikopat until the spring, putting it in an excavated trench and fill the earth. Roses safely preserved until the spring.

Additional information!When planting roses seedlings when the roots have dried up, you need to put in the water for about 20 hours. You can add to it a growth factor.

The roots and stems should be cut, leaving 30 cm, and damaged or insufficiently developed shoots – cut completely disinfected in a solution of copper sulfate.

Seedlings will be comfortable in a sunny spot protected from wind and drafts. (Rose not tolerate drafts). Stagnant water, they also do not like.

The soil composition is very important for roses – it must be fertile. If the ground is loose enough, it is necessary to add sand or peat, if sand – improved by humus, black earth and even clay. Culture is very poor grows on dry, sandy soils.

Before planting should be added to the planting hole humus or compost fertilizers. Planting hole prepared approximately 50 to 60 cm. Fertilizer is mixed with the base primer. Root system during landing gently straighten and covered with soil without leaving voids. 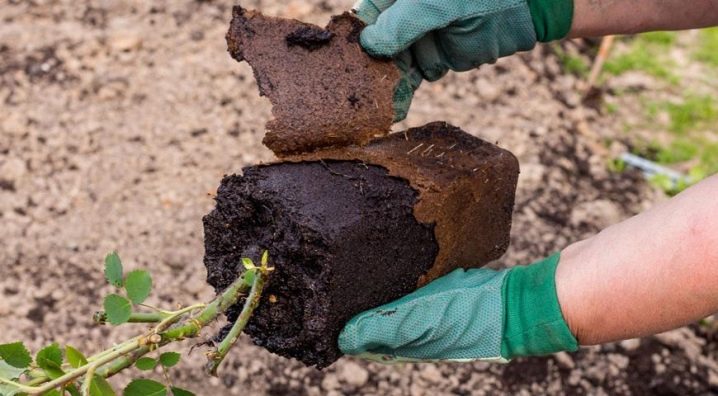 The root collar at planting bury need a little (3 cm). Without deepening in the harsh winter roses can primorznut. In the southern regions can be planted bushes without covering the root neck.

For better growth and development requires regular watering with dressing. Rose-shraby need infrequent watering and abundant in a dressing based on potassium, calcium and phosphorus. Water the plants little and often not recommended. In the context of dry and hot climate roses are watered once a week, and in regions with moderately humid and humid climate – every 10 days, in the early morning or late evening.

Periodic watering should be done directly by plants, so as not to create excessive moisture on the leaves and stems. This will protect the plant from the risk of fungal diseases. When watering is necessary to fill the space around the bush, dry land, creating a cushion to prevent water from spreading.

Roses do not like nor cold, nor the arid heat. In such circumstances, it is important that the soil does not dry. To this end, under the rose bushes should be decomposed mulch. Mulching can improve the roses growing conditions and protect them from drought and cold weather.

Every 3 years grown rose bushes need of rejuvenation. To do this, at the base remove all the old branches, opening the way for young people who manage to get stronger before winter and to form a complete rose bush. 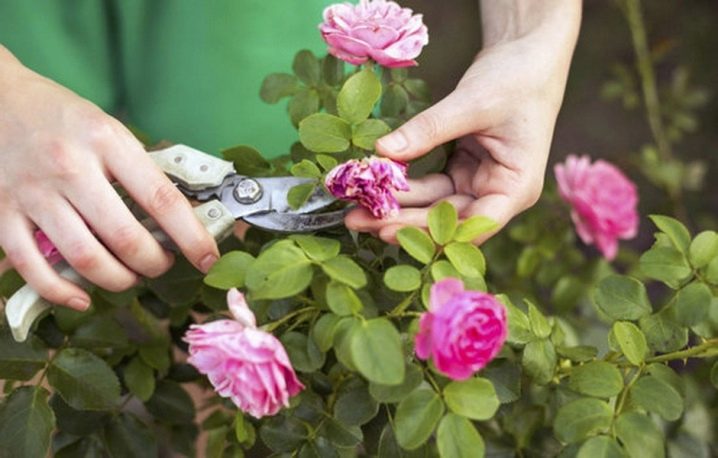 Spring removed podmorzshie wrong growing and diseased branches. The main thing – keep up to five strong shoots, which will be matured for 7-8 healthy kidney (rest cut off). Bushes may have branches of different lengths and cut them to an average of one third of the length. Severe pruning can significantly weaken the bush.

NoteThe main aim of the spring crop – to stimulate the growth of new shoots, which appear flowers

Summer pruning by removing faded flowers with part of the shoots stimulates the re-flowering. Remove the wild and thickening bush shoots. Summer pruning finish at the end of July, so as not to stimulate the growth of new shoots in later periods, which do not have time to mature before winter.

Fall pruning is carried out to prepare the plant for winter. Deleted and nevyzrevshie young shoots, the remaining leaves and buds, as well as patients, and dry branches. If they are not removed, they begin to rot and can provoke the appearance of fungal diseases.

Rose bushes shrab-resistant to most diseases are hardier and easier to carry the disease. Even despite the fact that most of the varieties have good resistance to diseases, under unfavorable conditions can breed disease-causing microorganisms.

Of pests on roses most often attacked by aphids. In combat, you can use chemicals, or traditional methods, such as spraying the bushes with a solution of soap.

For all its tolerance to low temperatures rose bushes still needs insulation. In the southern regions enough to hide the roots of the plants and covered them with sawdust or fallen leaves, in the more northern areas are building a shelter for the bush of a suitable material. 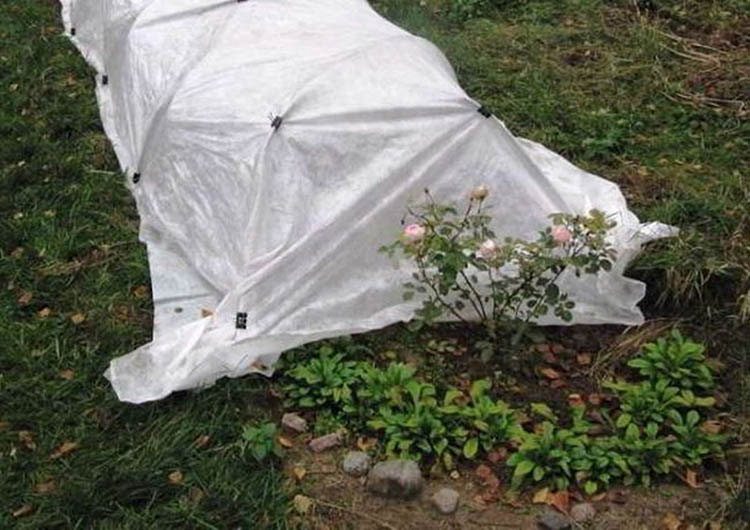