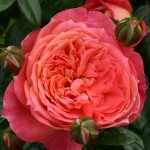 Belle Rose – the pride of gardeners. The number of species and varieties of this plant very much. One of the most popular – Rose Queen of Hearts (with the beautiful flowers and length of flowering).

According to the classification Queen of Hearts Rose (Queen of Hearts) refers to a group Floribu? Nda (flowering), which resemble unpretentious polyanthus and beautiful hybrid tea roses. For the duration of flowering they resemble hybrid polyanthus roses, and the shape, size and color of the flower – a hybrid tea.

The variety was bred in Germany in 2018 in the kennel Kordes.

Hearts rose bloom in the second half of June. Flowering in this period prolonged. The second wave of flowering is repeated in the autumn. Pink, tinged with orange, pitch densely gathered in large (10.8 cm diameter) flower. On the stalk they grow singly or gathered in the inflorescence of 3 pcs. The flowers stay long on the bushes and do not suffer from natural phenomena. Hot sun rays and prolonged rains do not affect their bloom.

Care for rose bushes easily. For their landing to choose a well-lit place. The distance between the card must be less than 30 cm and between rows – 90 cm Planting shrubs can spring and autumn.. The soil is suitable for rose slightly acid, well-fertilized, with a high groundwater table as Rose does not tolerate excess moisture.

Planting holes are prepared in advance. The mixture was poured hole of humus and earth. The roots straightened and covered with earth, abundantly watered. After watering the spud.

It recommended zamulchirovat soil around the bush, as a large number of leaves in the bush quickly evaporate moisture. Mulching will prevent rapid evaporation of the water and the growth of weeds.

Roses moisture-loving plants, and watering should be done regularly. shrubs summer watered abundantly, at least once a week, and by the fall watering is stopped so as not sprouted shoots that are not able to spend the winter.

Pay attention! Rose Queen of Hearts needs a lot of additional nutrients that it spends a large amount of buds. 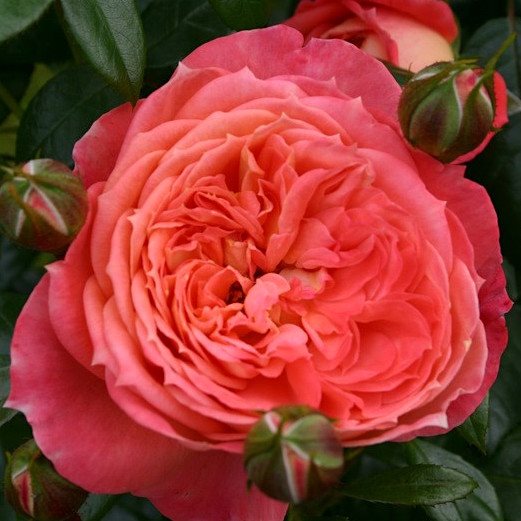 In the spring, before bud opening, hold the main cutting shoots removed over the age of two. Summer pruning prolongs flowering.

Important With spring planting roses pruned immediately, and in the autumn planting – no.

Defeat rose diseases and pests reduces their decorative effect. Roses are often ill botrytis, powdery mildew. This variety is resistant to these diseases.

Rose bushes need to prepare for winter. They are cold-resistant, but need a little shelter. With bush remove buds, leaves, pruned shoots. Top spud the ground and cover with leaves, pine needles, sawdust.

The main advantage of the varieties of roses – abundant flowering: bloom beautiful flowers almost without interruption, until very late autumn.

Roses Group Floribu? Nda decorate their long flowering of any land. Impressive look both single and group planting of plants.