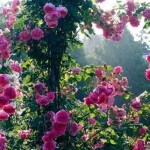 Grade climbing roses are widely used for garden decoration, any portion of the country. The most popular among growers varieties that bloom throughout the summer season.

Climbing roses are divided into main groups – rambler with small flowers, flowering only once, and Climber – large-that bloom repeatedly throughout the season.

Rose Parade climber refers to climbing Climber. This popular variety was taken in 1953 in America, based on the variety New Dawn (New Dawn).

Blue Rose Parade combines elegance and glamor and is considered one of the best in the group thanks to the beauty, resistance to diseases, rain and frost. The bush is developing rapidly and gives a lot of new shoots with colorful hanging flowers.

Povtornotsvetuschaya rose blooms in a season several times, with a short break between flowering. It blooms in the second year, but can bloom in the first year, each year increasing the number of buds.

Roses Parade varieties can grow as a normal bush. To do this, it shoots are cut during the formation of the bush, and he grows without supporting structures.

The landing in open ground

The growing climbing rose serious advantage is its simplicity. Even novice growers can grow Parade.

Seedlings planted climbing roses in spring and autumn. Autumn (September-October), the spring – in April-May, when the soil temperature of 10-12 degrees, until bud. Place selected solar, even in partial shade the plant will grow, but will bloom less. The brighter the spot, the more abundant the plant will flower. It is desirable that the lighting was in the morning and light penumbra in the middle of the day.

Soil roses like fertile, well loosened. Unlike other climbing roses, it can grow in different types of soil: on sandy and loam, but flowering will be less abundant.

It grows in open, ventilated area, but can not tolerate drafts.

Bushes planted at the walls freely, at a distance of 40 cm to circulate air for rapid drying petals from rain and dew.

When groundwater is shallow root rot occurs. Groundwater should lie at least 1.5-2 m from the surface, since the root system of a rose of such length. When the table is shallow water at the bottom of the landing pit is formed by laying of concrete or stone to the root system develops horizontally. Not suit her and swampland.

Before planting roses climbing klayming Parade advance conduct preparatory activities. Seedling shoots selected from 2-3, with numb, intact bark and root system with many roots. Dig the soil around, and added to the wells of half a bucket of compost or rotted manure. In sandy soil add a little clay in clay – sand. The pits make the dimensions 50×50 cm wide, 55-65 cm in depth at a distance of 2-3 meters from each other. Fertile layer should not be less than 30 cm.

Additional information!Before you plant the seedlings in the spring, it is possible to carry out preparatory work in the autumn.

Before planting, the seedlings were placed in water for 30 minutes, it is possible to leave them on the day.

Roots and the aerial part shortened to 30 cm.

For better rooting, you can use the drug”Kornevin”.

seedling is placed into the prepared hole, so that the inoculation was 10 cm below the level of the soil, the roots were freely. Hole half-filled with earth, compacted and watered and covered the rest of the earth, hard-packed, poured on top of water.

Rose can be easily propagated by layering arcuate. The best time for this – in May-June.

Young flexible Escape is pressed against the ground, at a distance of 30 cm from the top of a hole dug.

Leaves are removed, leaving them only at the top.

At the bottom of the escape lightly incised bark, carefully bending the cut area and covered with earth in the pit.

The tip should be positioned vertically. You can tie the cuttings to a small support.

When the fall, he will take root, it is separated from the mother bush.

As the growth of the bush stems tied up to the anvil. To feed them in the first year of growth is not necessary. Care is in the correct watering, weeding the weeds under a bush.

In the second year to take care of the plant complex.

Pay attention!Bushes timely watering is important in the formation of buds. After flowering watering and hoeing reduce, and in October stopped completely, so that the plant to prepare for winter.

In the second year the roses are fed with organic fertilizer, alternating them with the mineral. This type of feeding requires more than others pletistyh varieties. During flowering climbing roses are not fed.

Cut plants each year to form a beautiful crown, maintain a healthy state of the bush and long flowering. A first trimming is carried out in the spring, after the lifting of the shelter. In the spring of conduct sanitary pruning: podmerzshie cleaned, broken shoots. Branches are cut until the first buds for a better branching. Old shoots are cut to the ground because the bloom on them weak or may not be at all.

Summer faded blossoms are removed to stimulate flowering on new shoots. At the base of the bush is cut out wild shoots, the bush is not to lose its specific characteristics.

In the autumn, in October-November pruned branches and remove nevyzrevshie weak, broken shoots.

To save the plants from frost it is necessary to cover for the winter. In the autumn bushes spud, are removed from the poles and gradually bends to the ground and prishpilivayut. Tops must not touch the ground, leaves with stalks and cut off their shelter.

In the spring it is important to discover the roses at the right time to prevent zaprevaniya plants.

Grow a rose not only in the garden, but in room conditions – in the pot.

This home was named Rose Parade mix. It blooms regardless of the time of year, with a rest period of 2 months. Plant height 45-50 cm, medium-sized flowers and different colors.