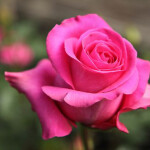 These hybrid tea roses derived from rose bengal mating remontant views. New types of roses are constantly updated and have their own peculiarities and differences. The collection of Hybrid Tea roses plants differ in the size of the bush, flower shape, color and the smell.

Flowering Pinkfloyd long period from early summer to autumn. Buds suitable for cutting long and are fresh in a vase.

Rose Pink Floyd grown commercially masshtabah- in the open and in greenhouses for cut. With the intention, can be grown in your own garden these beautiful roses. To do this, you need to know the technology of cultivation. These plants require special attention, so planting and care should be carried out according to the technology.

The chosen site for the roses should be well illuminated by the morning, and after lunch the plant must be in the penumbra.

To quickly dry the petals of the dew and the rain and the plants did not appear fungus, it is necessary that there is air flow around the bush. Selected fertile land and friable. The place should be protected from wind and drafts.

Better to plant roses in the spring at the end of April, beginning of May. Pre dug soil is prepared for planting pits onto approximately 50cm in depth and width and each prepared hole making fertilizer.

Rose likes a soft, friable, fertile soil. Before planting, seedlings were removed from the rotting and roots and dried up for two hours immersed in water to the root system is fed with moisture. After planting, the soil well tamped, spud bush and do around the roll out of the ground to trap water.

Throughout the season, alternating between making mineral and organic fertilizers.

Note! After the winter, when the active growth of green mass rose bush need to feed the nitrogen fertilizer.

At the time of occurrence of the buds are fed phosphorus fertilizers.

Poured rose as the top layer of soil dries. If the moisture in the soil will not be enough, it may cause a partial abscission of foliage, and cause a slow growth of shoots. After watering the soil under a bush mulch with peat, sawdust, pine needles or other organic material. This will allow:

Pink Floyd different frost resistance. In the autumn, with the onset of cold weather you need them okuchit dry land and an additional cover of spruce branches or compost.

Rose looks good alone, but also with other species of flowers, she looks great.