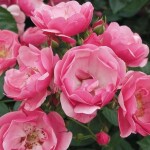 Roses – beautiful flowers are grown for a long time. A huge number of varieties formed by crossing different species to each other. Hybrid Tea Roses are distinguished beauty, length of flowering, the ability to endure bad weather conditions.

Hybrid varieties bloom on the bushes in height from 60 – 100 cm with simple or double flowers. Rose throws out some stalks with a single flower or entire buds.

Angela Angela Rose was bred by German breeder Reimer Cordes more than 30 years ago. Angela – unusual rose that thrives in all climates.

its popularity is growing around the world. Angelica hybrid tea rose grows to a height of 1 meter.

Floribunda Angela – povtornotsvetuschy grade (blooms from early summer until the end of September) differs abundant blooms semi-double blossoms. Cupped completely drop flowers (diameter up to 7cm), pale pink to magenta hue on the edge .. Rosa Angelica does not lose the attractiveness and buds elasticity nor cold and no heat. The flowers do not crumble and do not fade in the warm climate shrub grows quickly and profusely, can grow up to 2 meters in height. In cool areas rose less active.

On the shaded areas, they grow slowly and are reluctant to bloom. This type most resistant to excessive moisture, but abuse it is still not worth it. If you plant them on a small hill is not possible, then the solution will be good drainage.

Floribunda rose Angela has a high resistance to diseases and pests, and can grow and maintain its elegance in the penumbra. Despite the fact that it is not capricious in cultivation – it also requires proper planting and care: mulching, hoeing, removal of weeds. Put plants mainly in spring and autumn, to pre-select a suitable site on the sunny side with no air stagnation and drafts. Spring planting roses in late April – early May, when the soil temperature warms up to 9-10 degrees.

The soil should be fertile and easy to have access moisture and oxygen to the root system. Roses do not like stagnant water around the roots and ground water should lie deep.

Pre-dug soil and introduced into each prepared hole fertilizer. Dimensions wells such that the root system was available where in the expanded form. The minimum dimensions of 50 to 50 cm – in the cramped conditions of the root system develops bad. Straighten the roots so that they are uniformly filled space in the well, gradually dosypaya earth and tamping firmly. Inoculation place (root pin) must be 2-3 cm below the soil surface. This will positively influence the development of additional roots. After planting the bushes profusely watered and maintained ground moist until the plants will not be accepted.

stopped in the middle of August to help the bush to prepare for winter.

If seedling bare-root, it is recommended to hold before landing in the water a couple of hours, so that the roots were filled with moisture. Damaged and dry the roots are cut to a living tissue, long pruned. Also removed the sick, old and dry branches, healthy shortened to 2-4 buds.

Closed root system (together with a lump of earth) precipitated by handling.

Moisturize the soil under the bushes as it dries the top layer is poured copiously at the root of the evening or in the morning.

Note!Reset buds may occur when drying of the soil.

deliver us from carrying out frequent loosening and weeding;

Repeating this early in the spring and before the blooming buds. Selecting complex fertilizers depends on soil type.

NoteThe first dressing is carried out for the intensive growth of the plant, the second stimulates the re-bloom buds.

Pruning refers to the mandatory procedures without shrubs quickly grow, lose their decorative appearance. The main purpose of pruning – getting rid of the old shoots and stimulate the growth of the young. First held in early spring, after removing the cover from the plant. Removed damaged, podmorzshie with any signs of diseases branch, healthy shortened by one-third part of it, so that on each shoot is left 3-5 buds.

Removing faded flowers is important for abundant flowering species, as it stimulates the continuous development of young flowering shoots. Timely removal of withered flowers save the nutrients that would have been spent on the formation of the fetus.

Care for Rose stopped in August to the bush began to prepare for the winter and did not produce new shoots, which will be difficult to spend the winter.

With the onset of cold weather remove leaves and flowers shoots are pruned by half, it was convenient to shelter for the winter. Rose Angelic – winter-hardy varieties and does not need to be carefully ukrytii.Chtoby prepare plants for winter, their spud the ground to a height of 10 centimeters, sheltering spruce branches and agrovoloknom.

Angela Rosa parks recommended for single and group plantings, it can help to create a unique image of any site. decorate any facade.