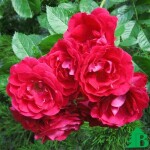 Roses – beautiful perennial flowers that adorn its attractive appearance of any garden
.

Beginners who have no experience in the cultivation of roses, experienced gardeners are advised to make a choice on the climbing rose Flamentants. Variety, which will bring the weight of enjoyment from the lush flowering and beautiful combination with other plants. 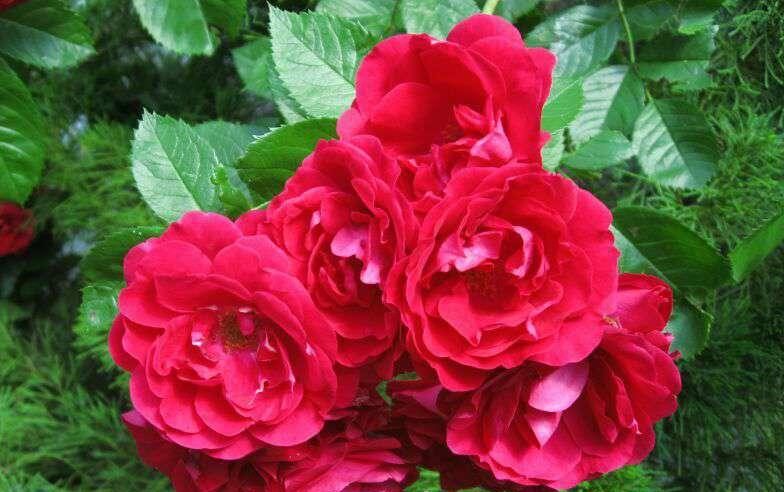 A suitable time for planting climbing roses – spring when the soil warms up to the temperature 8-10 degrees C.

When planting in the autumn, at the bush form young roots, before the cold weather they are hardened and well hibernate.

early spring at the same time begins the development of the ground part and root system, which leads to the formation of a strong hive.

Where is best to plant climbing rose?

Climbing rose Flammentants – a perennial plant with a strong root system. and the most important thing to choose the right place it, will depend on it, and its growth and the number and size of buds.

It should be sunny, provided that the plant will be covered more than 6 hours per day, well ventilated, and the next should be a free place to hide them for the winter. It is impossible to plant climbing roses in drafts and wetlands, and in those places where before it grew roses. 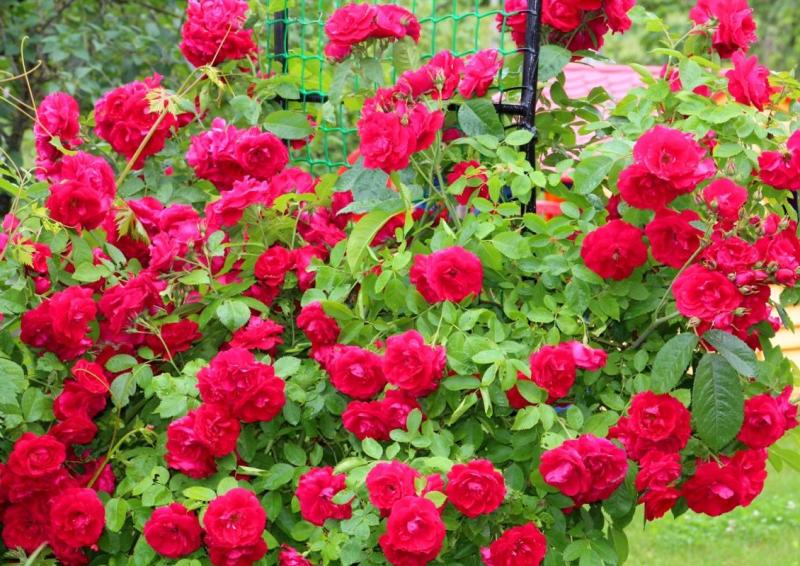 portion with a slight slope, will protect the soil from excessive moisture. landing pit dug at a distance of 50-60 cm from the wall to have a place for the root system.

Getting fit is necessary to prepare in advance the landing pit. They should be 50-60 cm deep to the root system it has free. Planting pit well fertilized humus or compost mixed with soil.

Note!After planting, the soil is fertilized in the next season.

Seedlings planting climbing roses to prepare. They are soaked in water (preferably on a day), so that the roots were filled with water. Then produce a crop. Of all the shoots choosing 3-4 strong, cut them at a height of approximately 25-30 cm, and the rest are removed. Roots also pruned, removing damaged and too long, leaving little branched. This process stimulates the plant to grow during the first year after planting, and the next year, we can expect abundant flowering.

Lowering the seedling in the planting hole, the roots of his carefully straighten and tightly pressed against the ground. Place of vaccination (if grafted roses) deeper at 3-4 cm. The soil well tamped, and very abundantly shed water to the soil subsided, and had no cavities around the roots. Planted bushes is necessary to hill loose soil. to protect the root system from drying.

So that irrigation zone retention of water, it is necessary to make an earth roll.

Stems climbing roses is attached to the support.

When watering is necessary to land well soaked. If irrigation is superficial, the roots will grow toward the surface, and they can vymerznut winter. It is better to water less, but more abundant. Watering at moderate sediments do once a week (up to 15 liters of water per bush), removed the weeds and make feeding.

Rose can be planted singly or in small groups of several bushes, a distance between them of 1 m.

Climbing roses without cutting two years fast thorns, it will be difficult to go to the bush, the more their shelter for the winter. It is very important for climbing rose Flamentants pruning, which is carried out during the season several times. twice a year – in early spring (before the start of sap flow) and summer – after flowering.

Spring is the most important crop. After removing the cover starting to cut. Spring plant relieve dry and invalid branches form a crown proper form to save a decorative plant species, so it does not scatter to adjacent plants and buildings. 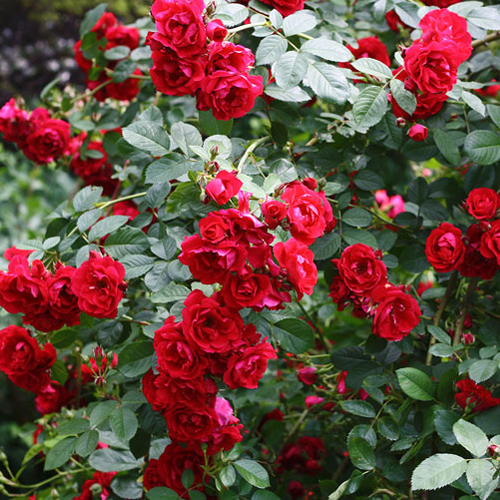 It is better for climbing roses high and low cutting. Cut only a small part of the branches, if the shoots grow very quickly, held the average cropping up to 6 or 7 buds. Such a method of stimulating the plant to flower much earlier. After flowering buds withered clean, that they did not take away the nutrients from the plant.

In winter, the whip, half-cut so that you can hide them

In the summer, after flowering roses also need to fertilize. Last time they fertilize in late August and then begin to prepare for winter, stopping feeding and watering, so as not to appear young shoots, which will be difficult to spend the winter. Used in this period is usually potassium compounds.

How to propagate climbing roses?

Climbing roses can be propagated by means of grafting, layering and cuttings. Reliably reproduce rose flamentants using strains. Use the shoots that grow from the root collar. In early March, they bend down to the ground and placed in a small groove, then sprinkle loose soil. In the autumn cuttings take root, they are separated only by the following spring, and weak plants – only one year.

Cuttings – the most effective method. Cut after flowering shoots 17-20 cm with 3-4 buds.

Cuttings can root in two ways: in water and soil. in the first case the stalk put into purified water. After the appearance of roots they are thrown into the pot, and until next spring look after him like a potted flower.

Budding less popular with gardeners, propagated by this method can be only a few varieties of climbing roses.

The variety is not susceptible to pests and fungi is known for resistance to common diseases among the roses. If she is to provide adequate ventilation, it will not be affected by fungal diseases.

Flammentants rose is very popular because of the tolerance of the summer heat and severe frosts, during which she fell in love with flower growers. Her resistance to colds allows even to grow in northern regions.

In the autumn reduce watering to a minimum and loosening, stop fertilizing with nitrogen fertilizers and give only potash and phosphate.

In October, before the onset of frost whip is removed from the support, remove the leaves and do pruning bushes around the root collar is filled dry garden soil 20-30 cm tall

But the winter shelter, especially for the northern regions is a prerequisite. After cutting the whip rose gradually bends to the ground. To keep warm, branches laid on the dry leaves. When the temperature drops to 5-7 degrees Celsius, they are covered with cover material. It can be used as protection from strong winds and frost spruce spruce branches, sawdust, agrovoloknom.