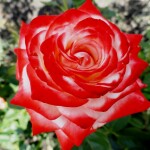 Roses – exquisite, beautiful flowers occupy one of the main places in the flower world. Representatives of the hybrid tea species have unusual color of petals and beautiful shape bud, climatic conditions well tolerated. From many of these varieties, each has its own characteristics, among which stand out for their beauty. One of them is Rose Empress Farah. 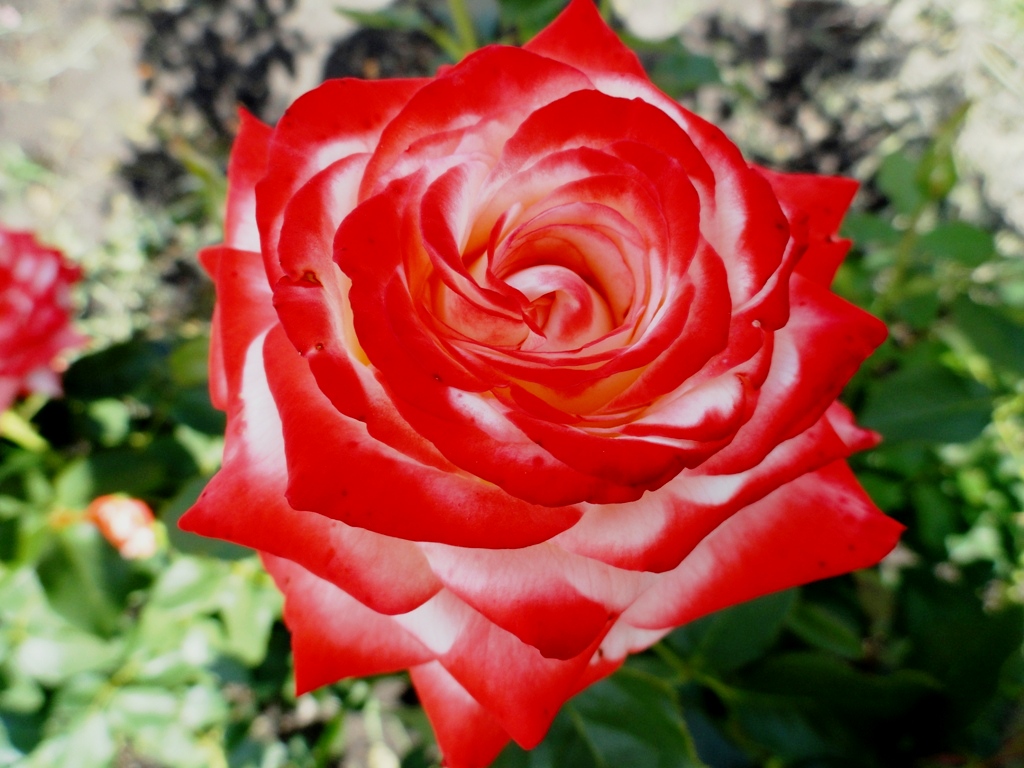 Rosa Farah was bred in France in the early 90-ies of the last century a famous breeder J. Delbarom, who called her the name of the Iranian empress.

Bushes of this variety roses grow tall, to 2 m.vysotoy. On erect long shoots formed on one rarely several flowers. The buds are large – with densely packed petals shaped glass, with subtle barely perceptible aroma. Diameter disclosed bud can reach up to 13 cm. Dissolve they become terry. Curved outward petals are painted in two colors – white at the base, along the edges of passes in the red. The flowers look beautiful at any stage of flowering, good for cutting. Prickly bushes have roses, a large thick foliage is light green.

Roses Emperor Farah has its own characteristics:

Hybrid Tea Rose Empress bloom continuously – from mid-June to late autumn. The buds on the bushes are kept for a long time, not less than 10 days, and they are not afraid of rain, sun, wind. Depending on the flowering period flower color changes.

The best time for planting roses is considered to be spring – mid-April and early May, when the soil is well warmed. Plant can be and early autumn. Dropping rose Empress in open ground, pre-prepared soil for it, 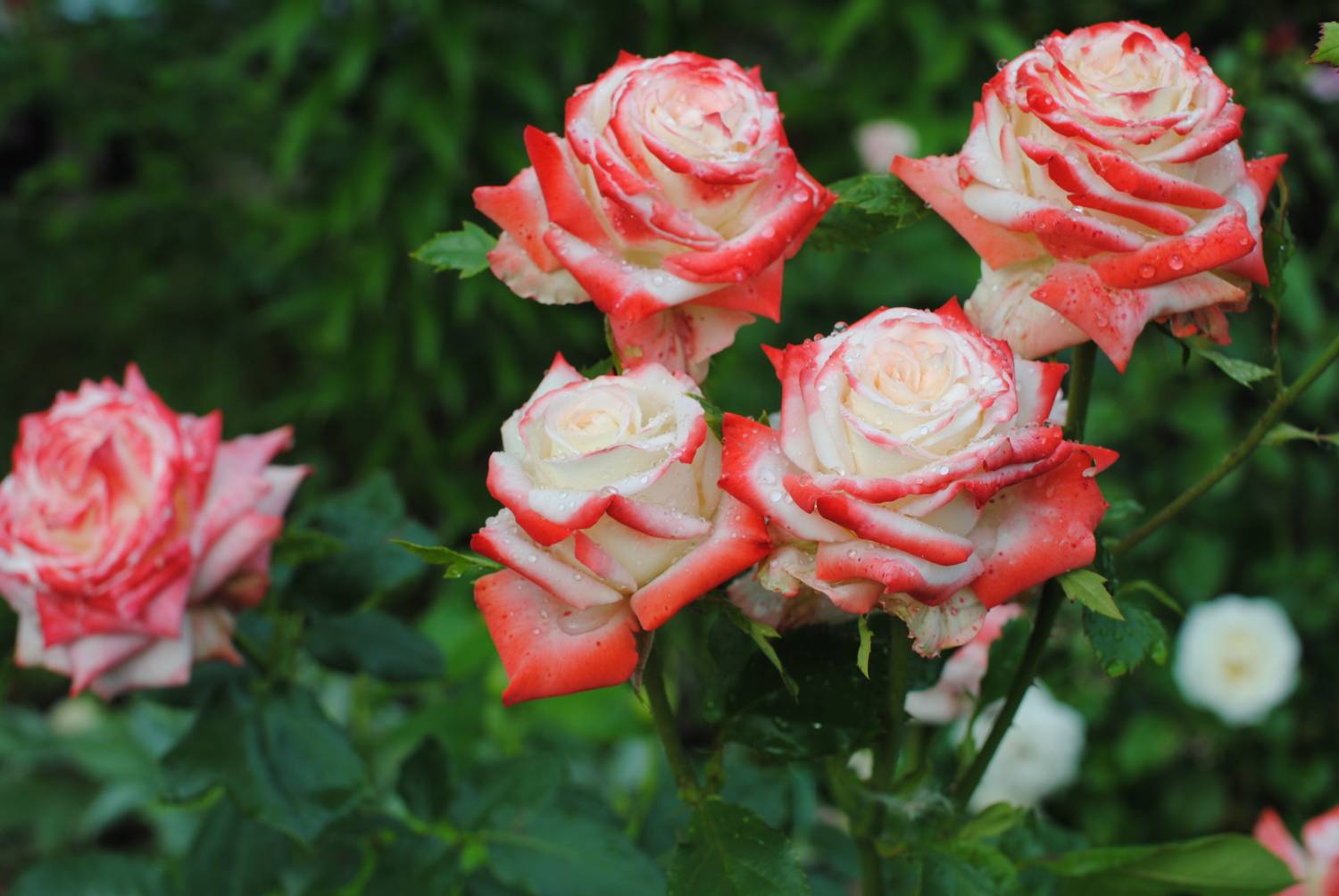 For spring landing ground is prepared in the fall, at least a month before planting. Dug up the ground and make holes in which to plant the bushes. They should be the depth and width of not less than 50cm. At the bottom of the pit poured small drainage layer prisypav it fertilizer and fertile ground. Rose Empress Farah can take root in any soil, but it is better suited to her dry, loamy, slightly acidic. It is easier to grow in slightly acidic, loose soil. If soil acidity is high, it is possible to make the soil slaked lime, ash, to reduce it.

On the site, where they should be planted roses should not be shallow water table. Plants do not like high humidity – it can lead to rotting of the root system. 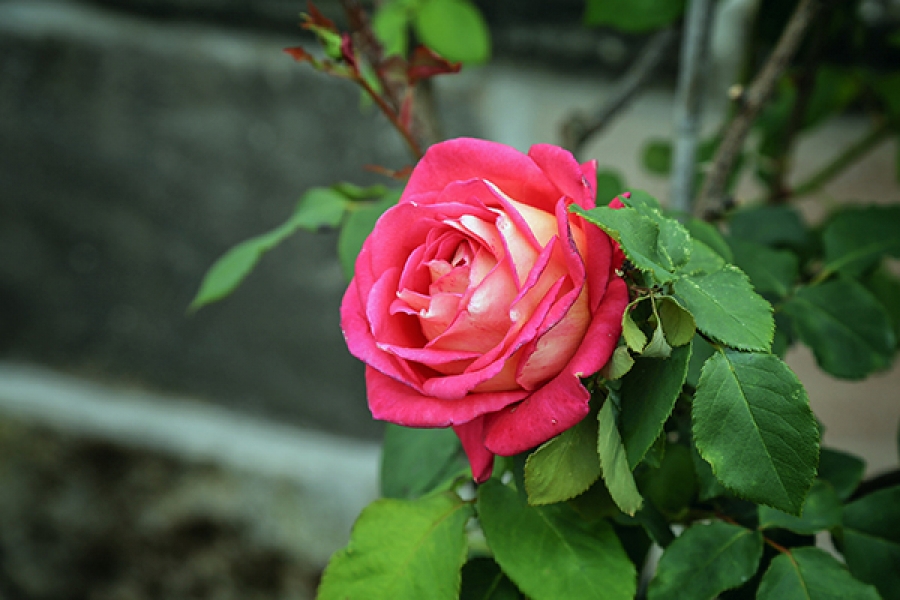 Rose Faruh thermophilic plant and it is selected for a bright place, without drafts and where not blow cold wind. If you put the plant in the shade, bright colored flowers will fade with lack of sunlight. Acquired at the store before planting the seedlings need to prepare. They carefully inspect and remove damaged and dry roots. Dried cut to a green space, and to shorten the long February 3 kidneys.

The roots before planting lowered to 2 hours water so that they were filled with moisture or treated with a growth factor.

When planting the plants in a hole, its trunk exactly set, gently straighten the roots, gradually prisypaya earth and tamping firmly. After planting bush abundantly watered and spud.

Note!All fertilizers rose react positively (they are sensitive to a lack of nutrients. 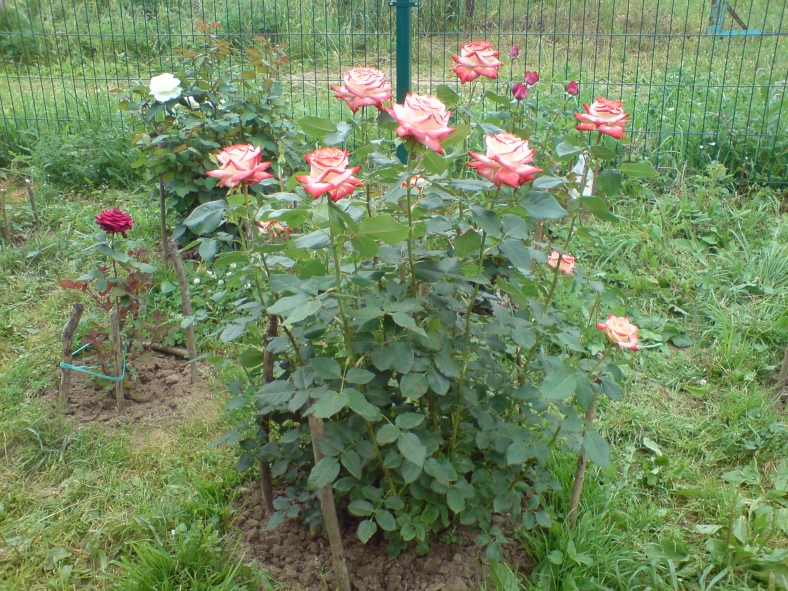 Mperatrice Farah rose is not very demanding on the care, well-adapted to local weather conditions.

Some recommendations for growing:

It is difficult to give the desired shape of the bush – the stems are very long and can tend toward under the weight of the buds. Essential for plant growth is timely dressing.

Additional information!around the bush, at a distance of 30-35 cm dig furrows and watered. Then they poured fertilizer and fall asleep on top the ground. The next day, under a bush, loosen the soil.

The soil around the bush recommended zamulchirovat (peat, tree bark, sawdust and other materials) in order to prevent rapid evaporation of water and weed growth. Fertilizing rose bushes

The first feeding is carried out in the spring after removing the cover. Apply nitrogen fertilizer to increase green mass.

In the summer, for abundant flowering when the buds are tied – phosphoric ,.

In late August, making stops all fertilizers that cause the rapid growth of new shoots, which do not have time to stiffen until winter and vymerznut. Potassium fertilization without saving early fall will help the plant to gain strength and that it could well spend the winter. Copious irrigation watering needs in the period of active growth and budding. If insufficient moisture in the soil the plant slowing growth of shoots and can occur partial plant abscission listvy.Polivayut abundantly once a week in the sun-heated warm water. In spring and autumn, watering is carried out about once every two weeks. After watering the ground around the bush without fail mulch. It is also a timely need to loosen the soil around the plant, so that the roots can get enough oxygen. I recommend doing it once a month. 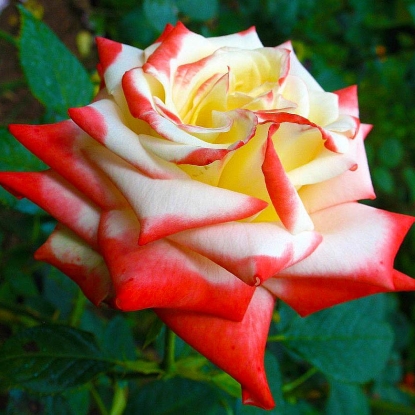 Pruning of shoots on the bush is held seasonally. In the spring, before the awakening of the kidneys to carry out sanitary pruning cut old vymerzshie, damaged branches. Young and healthy shoots are cut by a third, to form a bush.

In the autumn, before the onset of cold weather, remove nevyzrevshie, weak, broken twigs, flowers and leaves.

In the summer time, for propagation, rose cherenkami.Takzhe perpetuate cuttings propagated Empress rose. Shoots for propagation by cuttings is preferred by those who have not yet revealed the bud.

This variety is not susceptible to diseases typical of other varieties of roses. Powdery mildew and black spot frequently occurring diseases of roses are not afraid for her.

This variety is not susceptible to diseases typical of other varieties of roses. Powdery mildew and black spot frequently occurring diseases of roses are not afraid for her. Only under unfavorable conditions, it may be a predisposition to these diseases. Prevent the spread of the disease can be cut weak, dried and damaged shoots, treat with fungicides.

In autumn, after pruning the plants, it is necessary to hill his earth to a height of not less than 0.3-0.4 m. In the future shelter roses do not need, because they refer to cold-resistant varieties. However, for the more northern regions will reliably hide bushes insulate material.

Any collector-grower wants to have around on a bed beautiful rose Empress Farah.