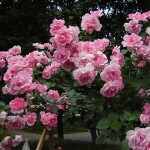 Rose – one of the favorite flowers gardeners. That is why their cultivation has been a huge number of summer residents and owners of private houses. Rose – a universal culture, which is widely used for the decoration of country territories. There are many varieties of plants, so you can choose the best fit for a particular landscape design.

Roses polyanthus what it is 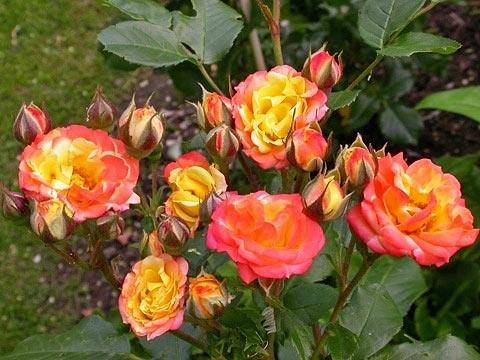 There are many different species and varieties derived breeders: they differ bush height, color and density of the petals, bud size and the number of them in the bush. For landscaping often grown polyanthus rose low, silnovetvistye, compact bushes. 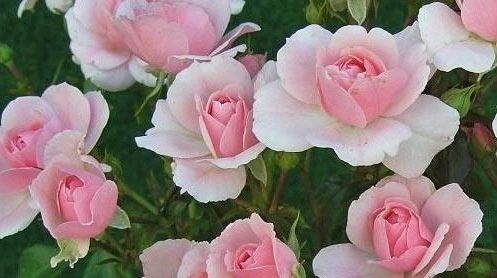 Polyanthus rose appeared in the late XIX century, as a result of cross-breeding of dwarf and flowered hybrid tea roses bloom again, or Indian. The result is a hybrid with bright coloring of inflorescences, which he got from Chinese parents, as well as saturated green dense foliage and an abundance of inflorescences of Japanese ancestry.

First Polyantha-Rose were received in 1873 and in 1880 in France by Jean Baptiste Guillot.

Polyanthus they are called because they bloom intact inflorescences, each of which can be up to hundreds of buds. From the Latin literally means”many-flowered rose.” Some rose varieties are very similar to them, sometimes it is difficult even for an expert to answer this question, so they can still call the tiny, ground-covering, spray-Rosa.

Characteristics of the plant

Rose Bushes polyanthas height of 0.4 to 1.5 m. Basically low. Stems short, dense with small leaves. Flowers are simple or double, are collected in inflorescences (flowers 50 or more) in a diameter of about 4 cm. Cupped shape, with a weak aroma. Blooming roses are always abundant and elegant, it is impossible for them to see the leaves, the flowers stay long on the bushes.

The colors in this group all kinds: white, orange, red and pink, etc. There is in this large-group and.. 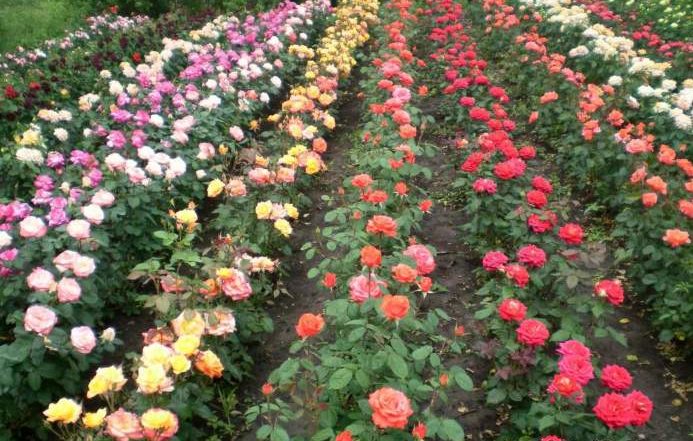 Polyanthas varieties of roses have a long flowering time – from June to mid-fall. Their petals are resistant to sunlight and during the whole flowering period are as bright as the original. Vigorous varieties are sometimes used to cut, the flowers are in the vase life is good.

Note!With a high degree of resistance to disease, they do not need a lot of water and fertilizer, and most of them non-stop blooming for the season.

These roses are unpretentious care, resistant to adverse weather conditions – easily tolerate high humidity and dryness of the soil, are not afraid of shading. Compact bushes almost do not need pruning, carried out only sanitary.

Despite all these advantages Polyantha-Rose is not in such demand as hybrid tea varieties, floribunda group (resulting from the cross polyanthas and hybrid tea roses) that features a larger diameter flowers and more diverse range of colors.

The characteristics of species and varieties of crops

Species and varieties of roses displayed a lot about 500. There are old and modern varieties. Among the most popular and interesting should be called white roses.

There are several ways polyanthas planting roses. Polyanthus roses are different in that they can grow in many ways:

Propagation by cuttings and seeds are often used.

Germination of seed is best done in December, sprouts growing up at the time when it can be planted in open ground. Before they were seeded in soil germinated in moist tissue for 10-12 days, thereby doubling germination. A seed is planted one per well to a depth of 5 mm. Earth humidified, and the container is covered with foil. Humidity ground constantly maintained at about 18 degrees, until the germs (about 2 months). The film is then removed.

Planting seedlings in open ground should be at the end of April or early May (guided on the weather). Shrubs should be planted no closer than 50 centimeters from each other, so they do not drown each other. Plant bloom with this version of sowing only in the second year.

Cuttings –the most familiar and popular method for roses. It is very simple and rezultativen. Rooting cuttings at any time of the year.

In the spring should be cut off from the bush dried and damaged branches, healthy shorten by one-third, leaving each shoot with 3-5 buds.

During the period of flowering branches, and all the dried flowers should clean up in order to stimulate the appearance of new buds on a bush. Without regular pruning especially in partial shade, the branches are too drawn out and much less bloom.

Note!Pruning roses polyanthas too much leads to lower growth, but a lack of pruning results in a dense plant with multiple colors.

Watering during dry weather of this sort is carried out once a week. Fed during the season several times mineral and organic fertilizers. Care for the bushes stopped in August to the beginning of the plant to prepare for winter, and not wasting time on the formation of new shoots.

One of the remarkable qualities of the band – high winter hardiness. Even when severe frosts, if the branches were damaged in the spring new shoots will grow from the roots.

Before the first frost bushes hilling to a height of 10 cm, are covered with spruce branches or agropolotnom.

The main pests and diseases of culture and control measures

The most dangerous diseases of garden roses are infectious burn, mildew, blackspot.

For the success of protective measures is important to identify the time of onset of the disease, when it can be relatively easy to stop and prevent further spread. In this case, the most effective drugs containing copper,

In addition to growing in the garden, polyanthus rose bred in pots as houseplants. These roses are not particularly demanding in care. Very nice looking containers with these plants, installed on the terrace or balcony. Certain varieties Polyantha-Rose is used in shtambovoy culture.

Long and abundant flowering, unpretentiousness in growing roses makes it possible to apply these in the design of landscape design. These roses are good in single and group plantings – among perennials and annuals. To create a continuous blossoming border bushes are planted at a distance of 30-50 cm, developing, shoots link up in a single chain.