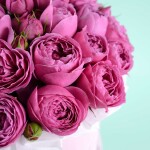 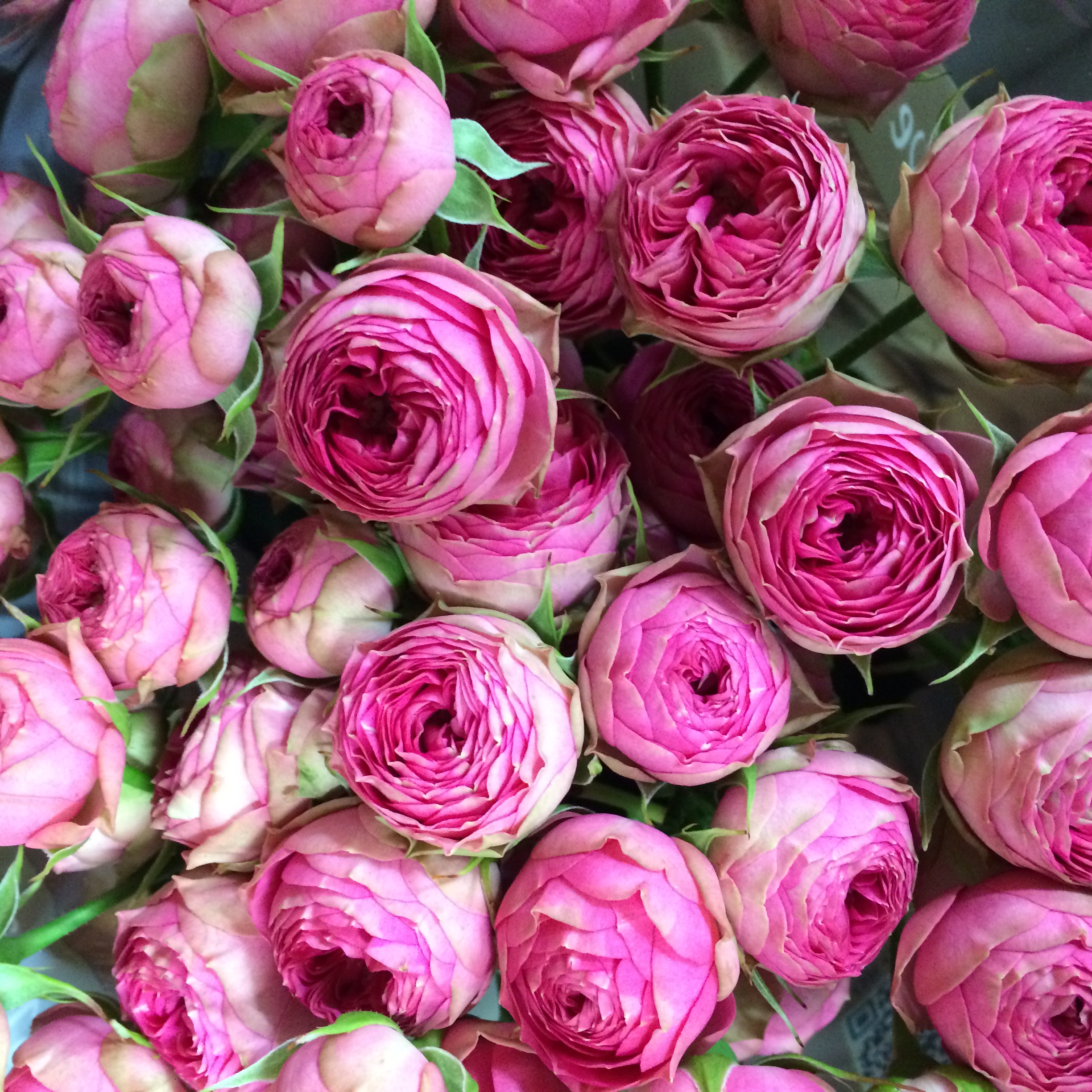 Roses – decoration of any garden. Peony- (English Rose) – David Austin hybrids resemble blooming peonies. Flowers are characterized by a large number of petals. The beauty of these bushes is impressive. Use them to create hedges, in single and group plantings.

Rose Peony (as Austin Rose) – is the common name of hybrids. There are around 200 species of roses. Grades are divided into four main types: pink, yellow, white and red. 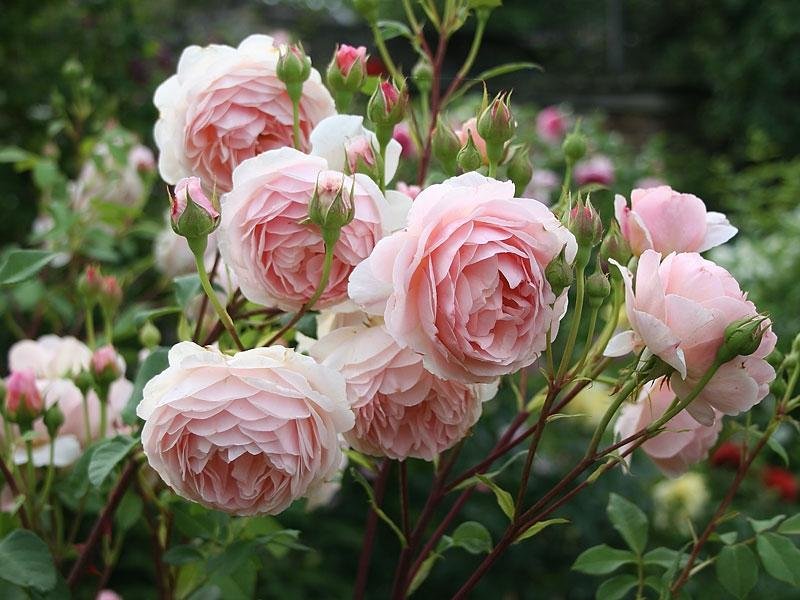 Peony- or English rose was created by the famous English breeder of roses, David Austin in the 80-ies of XX century. Inspired by the old roses on display in France, he decided to diversify their color, to enhance the stability of the negative external factors. Crossed the Gallic and floribunda rose, got beautiful flowers, like peonies. It was the first rose, called “Peony”.

In record time it was derived more than one hundred varieties, differing in hue, flavor and shape the bushes, and she rose became known throughout the world. Peony- rose varieties are not officially, but they have certain characteristics that allow the florist to determine them in a separate group.

Note!Now David Austin roses known for the beauty of flowers, their adaptability to climatic conditions and resistance to diseases.

Bushes pubescent, with thick, dark green leaves. During flowering bushes are covered with many beautiful buds. Another feature of these flowers is their strong intoxicating fragrance that tends to be stronger on cloudy days.

Characteristic features and advantages of the plant include:

Nevertheless, they still have certain drawbacks.

English roses, the so-called “pions” differ primarily from other varieties by its unusual shape of the flower. This type refers to the bushes. Shrubs vary in height, density, are climbing. Diameter Peony- flowers ranges from 5 to 12 cm.

Caring for roses peonies is not difficult because of the unpretentiousness of these plants. However, to properly develop the bushes, you need to know some of their planting and breeding.

Take care of the roses in the shape of a peony is quite simple. English Roses should be pruned in the spring, feed phosphorus and potassium during the flowering and watered heavily enough to prevent drying of the soil.

They grow well anywhere, but feel better in lit places, without drafts and stale air. It is necessary to eliminate the appearance of the surface of groundwater at the proposed landing site.

Neutral or slightly acidic soils are preferred. These flowers need permeable soil nutrient. Therefore, preparation for planting should begin in the autumn: in the excavated area for English roses and add compost or manure.

The best time for planting is considered to be the middle of spring, when the soil is already warm enough.

The minimum size of the landing pit is 60 x 60 cm and 50 cm in depth. Compost or manure is usually locates in the hole. The distance between two adjacent wells must be at least 0.5 m. The best choice is landing at a distance of 1 m from each other. Grafting seedlings during planting have to be above the soil level.

Planted bush and then well watered and mulch to prevent drying of the topsoil. Loosen the soil on a regular basis, taking care not to damage the root system, removing weeds, and if necessary, tie them.

Note!The roots of English roses just before planting can be treated with special growth stimulator. This will speed up the process of rooting of seedlings in the new location.

Rose bushes are watered as needed depending on the weather conditions, as the soil dries. On average, a bush takes 5 liters of water, but branched varieties need more – 12-15 liters. It is recommended to water the English roses in the evening, so that moisture does not evaporate under the influence of sunlight. Water for irrigation should not be too cold.

Pruning, as a guarantee of abundant flowering. How to cut the English roses in winter

Pruning should be given enough attention because it’s too thick brush often suffer from fungal infections and worst flowering. Mandatory procedure is performed in the spring, before moving juice. Any damaged, weak or dead shoots are removed.

In subsequent years, the English roses are cut twice a year. Conduct sanitary pruning in the spring and in the fall they are cut slightly before the frost. Pruning roses is held in the spring before the sap begins to flow. The tops of the stems as well as the old and diseased branches are removed during the procedure. Rules cutting spray roses are important nuances: stimulates the growth of new shoots, and also increases the roses disease resistance and insect.

Important!In the first year after planting, all the buds on the shoots are removed. Flowering is very deplete the young plants, and it can be frozen.

Fertilizers play an important role in the care of these plants. In the first year after planting the young plants are not fed. They have enough nutrients that are added to the planting hole.

In the first year after planting, it is not necessary to make fertilizer, because they have already been made at the time of planting. In the second year, with the onset of spring, the bushes Peony- roses fertilized every month. The nitrogen additive for the best set of green mass introduced as feed in early spring. During flowering nitrogen content decreases and is replaced with phosphorus and potassium. For this perfect organic substances: a cow or horse manure, chicken manure, compost and wood ash.

Early flowering shrubs sprayed with a solution of boric acid. For its preparation 1 g product is dissolved in 1 liter of water and stirred. Boron stimulates kidney education.

In mid-August, the feeding is stopped, the plants have stopped the growth of new shoots. Before the onset of frost shoots should be stiff to prevent freezing.

This rose is most commonly spread by cuttings. They are usually cut before the winter and keep the home in a cool place, wrapped in a damp paper. When one end of the cuttings appear callus and buds grow, the cuttings are planted in pots. In the summer they are put in the right place in the garden.

Acquired spring cuttings are immersed in a growth stimulant, and then in a loose soil nutrient. The upper part is covered by a plastic bottle or jar to create a greenhouse. When the plant goes into growth, you can remove the bottle.

Prevention and treatment of diseases of the English roses

Although English roses are relatively resistant to the majority of infections, prevention will never be superfluous. In the spring, before the buds have blossomed bushes, soil can be treated by them with a weak solution of vitriol.

Proper care to minimize the disease, but does not rule out the possibility of disease. The most common of which are powdery mildew, black spot and root rot. To prevent the disease during the growing season the bushes Peony- roses sprayed with fungicides three times.

Shelter for the winter Peony- roses

In cold climates must cover English (Peony-) rose in winter. You can use dried leaves, straw or sawdust. Even lignified shoots may freeze in the winter, so shrubs should be covered before the start of the cold season. This must be done immediately before the frost when the temperature is lowered to 0 -5 ° C. covering rose advance, they can melt.

When the temperature of the spring is set to zero marks, cover removed, mulch on the roots of the shovel stem.

In many front gardens to admire the beauty of the rose Peony. For their owners, they are a precious garden.