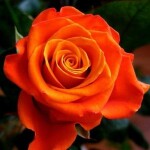 Monica Rose bred the German breeders in the 90s of the last century. This group includes such roses:

Marvelous smell of roses and flowering wealth attracts many gardeners. Sort allocated rich orange-catchy scarlet coloring large terry yellowish color at the base and on the outside. After blooming flower colors more monotonous. Flowers are usually solitary.

Planted in the garden rose varieties Monica can throughout the season to enjoy the beauty of terry yellow-orange flowers. They have a rich color, do not fade in the sun, resistant to disease. Abundant flowering flowers bright distinguishing feature Moniki. When the two-colored flower buds begin to bloom, they are very beautiful, but they do not lose their attractiveness and at all stages of flowering. At very long blooms erect shoots one large flower (size: 10-12 cm) which are suitable for cutting.

The shrub is high, erect practically without spines, with abundant dark green foliage grows in height and 1 m, but in a favorable climate can reach 2m. Flowering begins in early summer and lasts until late autumn, more buds ejected with each wave of flowering. At the time of flowering roses emit a light sweet flavor.

Planting and care for roses

Rose heat-loving plant, so the best results in its cultivation can be achieved in regions with warm climates. With proper care, Monika grows in different climates. Depending on the type of spray rose bushes may form different shapes and heights, blossom singly or whole form inflorescences. Roses can be planted in spring and summer. The best time for planting seedlings beginning of the month of May, by which time the soil is already warming up. Planted roses on the warm, sunny places, where there are no cool wind. Planting hole should be such that the roots were placed in it freely. The depth should be more than 50 cm, the bottom poured drainage of small pebbles.

Before planting seedlings better to take in the water, especially if the root system is open. Quite 4-6 hours. If the roots are dried up, then it is better to remove. The shoots are pruned, cut the weak, leaving the strongest and secondary. This will contribute to the accelerated growth.

Roses like sunny places, without a bright light they weaken and cease to bloom. For them to choose the places where there are no drafts or cold winds blow. The soil in the area should be well-fertilized, friable. Prepare it better in the fall, making organic fertilizer in the hole. Rose prefers fertile and light soil without stagnant groundwater. In the lowland plant is not planted as Rose does not tolerate stagnant water: it can lead to rotting of its roots.

Note!In order not to stagnate the water around the roots when planting is necessary to make drainage from the gravel or sand.

Landing pit preparing such an extent that the roots were placed in it freely. In cramped conditions the root system develops bad. The size of the landing pit should be at least 50 to 50 cm. The root neck are dropped 2-3 cm below the soil surface. This will allow the root system to grow well.

Before planting seedlings it is desirable to take in water several hours, they were typed to moisture. Damaged roots (rotten and dried up) to remove. The shoots are pruned, leaving the strong and medium. This will enable the bush to grow faster. Plants after planting abundantly watered every two days, so that it quickly took root. As shoot growth watering is carried out after the top layer is dry land.

Note!abundantly watered rose about a period of active growth and flowering, since the lack of moisture can lead to partial defoliation lean and Algal.

Watering is carried out under a bush, trying to keep the water from getting on the branches rose roses gibridnoy.Polivat recommend a warm evening, the settled water.

For roses throughout the season requires constant care .: regularly fed, weeded and watered. Monica rose to safely caught, you need to find an appropriate place in the garden for her.

The main importance is the timely pruning plants. An important point is the root bush care system. Organic and mineral fertilizers to improve the soil structure, increases the growth and flowering of plants.

Note! In the first year after planting the roses are not fed, because the fertilizers were applied in planting holes.

In the second year the first fertilizer is applied early in the spring to enhance plant growth. After cutting the stems, rose bushes fertilized special mineral fertilizers which contain nitrogen. A week later make organic fertilizer.

In the summer during the occurrence of the buds Hybrid also need to fertilize. Last fed rose at the end of August. Roses are beginning to prepare for the winter, stopping feeding and watering, so as not to appear young shoots, which will be difficult to spend the winter, are used in this period is usually potassium compounds.

To roses have always been healthy and active blossomed under the care you need to weed the soil of weeds and loosen under a bush. Loosened the earth is saturated with oxygen and retains moisture well, which contributes to the normal development of the root system.

The fight against pests and diseases

Most modern varieties of roses are highly resistant to diseases and pests, but non-compliance with the rules of agricultural technology can cause a number of serious problems. Common disease Hybrid Tea Roses mildew. The disease can occur due to the excess nitrogen fertilizers, lack of light and the excess moisture, the sharp reduction in air temperature. Most are infected densely planted with roses, who have not carried out a sanitary pruning stems. To avoid being infected by powdery mildew, when a spring bush leaves treated with soda solution twice in seven days, until the warm summer period.

As prevention is worth to monitor the accumulation of moisture under a bush. For this soil mulchiryut. Infected places were removed and burned, shrubs and the soil around them were sprayed with iron sulphate.

The black spot may develop towards the end of July. It manifests spots on leaves and can produce up to their premature fall .. Gray mold affects buds and young branches. They formed a fluffy gray plaque. For the treatment used Topaz fundazol.

For abundant flowering roses need regular and timely pruning. Spring pruning is important in the development of the bush, and spend it in the early spring. Stunted rose cut to 3-4 buds and the shoot length of 15-20 cm. Tall on the left kidney to 8,

Summer pruning is carried out after flowering. Wilted flowers are removed with a small part of the shoot, which provides re-abundant flowering.

Before preparation for winter crop in the autumn, at which the cut nevyzrevshie and damaged shoots, leaves and flowers.

Rosa Monica snowless winter could die from the cold, so you need to arrange it special refuge. The easiest method is to cover the roots of the rose spruce branches of conifers. The main rule that should be taken when the covering rose: to protect the material must not come into contact with plant shoots.

Under bush roots covered with dry leaves or needles of pine trees, poured top layer of soil or peat, sawdust. Usually it is enough to fill a bush peat, height 20 cm, the plants overwintered. Organic spring cover is aligned with the earth.

Hybrid Tea Monica is suitable for planting in hedges and on the background tracks. They look better in plantings with low-growing plants that cover the lower part of the bush. Monica Rose bushes adorn the garden areas, public parks, recreation areas. Take care of them easily.