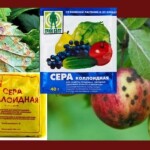 Sulfur is one of the most common fungicide used in horticulture. Its disinfecting and fungicidal properties are known and have been used for a long time. When spraying garden plants with sulfur solution, they get rid of fungal infections and parasites.

Characteristics of the substance

What is cumulus? This is another name for the substance. It is contained in rocks. A very good pesticide that can save garden plants from various diseases and insect pests.

Fungal diseases affect plants in any climate and hardiness zone. Even new disease-resistant varieties can suffer from these problems. To get rid of the fungus, sulfur copes better. During foliar feeding, under the influence of its vapors, sulfur penetrates the cells of the pathogenic fungus, slows down growth or even destroys the fungus.

Cumulus is used to protect garden crops from diseases such as powdery mildew, blackleg, scab and kila. In addition, sulfur will help to get rid of the spider mite. It’s a shame when well-groomed bushes are affected by spider mites or powdery mildew!

The yellow powdery substance is used both in dry form and in the form of a suspension obtained by dissolving granules in water.

Colloidal sulfur is non-toxic to humans and animals, but requires compliance with safety rules and regulations. The effectiveness of the drug depends on how long after infection the solutions are used.

Types of sulfur for plants

Garden sulfur is sold in powder form and granulated. It can be found both in pure form and in various mixtures. Now this mineral is presented in several forms: granules, powder, liquid.

Granular sulfur is an inorganic fungicide consisting of sulfur and various impurities. It is available in the form of water-soluble granules, in which the sulfur concentration is 80%.

Sulfur, ready for use immediately, is supplied in the form of a fine powder, and is used for powder. It is not used in strong winds, and is more often used in a greenhouse than outside.

Granules, compared to powder, have an advantage, since they can be mixed with other solutions, such as Bordeaux liquid.

Using colloidal sulfur in gardening is simple, although you need to take some precautions. It is important to follow the instructions on the package to prevent an overdose of the drug, and not to harm vegetation.

Important! The effectiveness of the solution directly depends on the correct dosage. To prevent infections, the sulfur concentration should be significantly lower than for treatment.

Dilute the granules in warm water, as the product dissolves better in it. Prepare the solution on the same day when the treatment is carried out. To obtain a homogeneous solution, water is slowly added to the product. Mix thoroughly so that the lumps do not clog the spray bottle.

Plants are treated in dry, windless weather. The drug is effective at a temperature not lower than 20 ° C and not higher than 27 ° C. At a lower temperature, the fungicidal properties of sulfur are significantly reduced, and at a higher temperature, the leaves of the plant can be damaged. 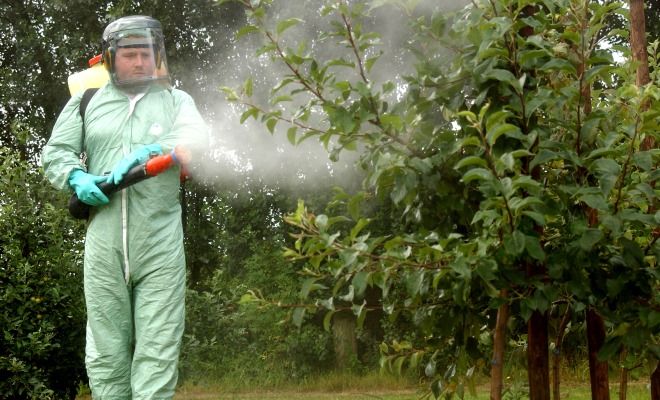 The treatment is carried out no more than 5 times per season. The latter is performed no later than 20 days before harvesting. Personal protective equipment must be used during processing.

It is best to do this in the morning or evening, in dry and windless weather. These conditions are explained by the fact that the main effect is provided by the vapors formed during the evaporation of the substance.

Additional information! At the same time with sulfur, other fungicides can be used, except those that contain mineral oils and iron vitriol.

When used correctly, colloidal sulfur is safe and effective in combating the most common fungal infections of garden plants. However, it is not recommended to use it on gooseberries. The leaves of this plant do not tolerate sulfur pesticide, die off quickly and fall off.

Positive and negative qualities of sulfur

There are definitely more positive qualities than negative ones. The substance has an active, powerful and long-lasting effect.

The only drawback is the need to use certain protective equipment when working, although garden sulfur is practically non-toxic. It is necessary to observe some precautions. In addition, smoking, drinking and eating are prohibited. After the procedure, wash your hands well with soap.

Sulfur fertilizes and acidifies the earth

It is also a fertilizer that stimulates the growth and development of many garden and vegetable crops. Sulfur is one of the nutrients needed by plants. It is better suited for fertilizing very alkaline or neutral soil, to reduce the pH of the substrate. Sulfur deficiency leads to yellowing of the leaves.

Since sulfur acidifies the soil, it is worth checking the pH of the substrate before using them. Sulfur will be useful in growing acidic plants (blackberries, azaleas, heather, rhododendrons), fruits: blueberries, strawberries and strawberries. In spring or autumn, it is applied to acidify the soil in the form of powder or granules.

What is sulfuric lime? It is produced by the interaction of sulfur with lime. It is insoluble in water, therefore it is a liquid sulfide. The fungicide serves to combat some fungal diseases, and also kills wintering insect pests, which is very convenient for gardeners. It can be used to combat a number of fungal diseases and pests on apple trees, pears, stone fruits, citrus fruits, grapes, tomatoes, roses and ornamental plants.

This is the perfect spray for cleaning the garden in winter. Sulfuric lime is mainly used when plants are at rest, at the end of winter, after the frosts have passed and before the leaves appear. It is used only exclusively outdoors, and the recommended temperature should be from 10 ° C to 30 ° C.

It can also be used during the growing season, but should be applied early in the morning or late in the evening to avoid burning the leaves. There is no exposure period. This product is low-toxicity, so the crop can be harvested as needed.

When used correctly, sulfur lime is a safe and effective remedy for the treatment of fungal diseases, such as:

In addition, sulfur lime can be an effective remedy for insect pests.

Why do plants need sulfur

Sometimes plants suffer from a lack of sulfur. Although sulfur seems to be a less important element for plants than nitrogen, phosphorus and potassium, in fact it is necessary for their proper growth and development. It is an important nutrient for plants because it supports many of their vital processes, such as photosynthesis, respiration and nitrogen uptake, and even the ability to take nitrogen from the air (in the case of legumes. It also allows you to limit the accumulation of unfavorable nitrates and heavy metals in plants, which is especially important when growing vegetables.

Symptoms of sulfur deficiency in plants

A characteristic sign of the deficiency of this important element in plants are pale young leaves covered with a network of light veins (chlorosis of young leaves). Over time, the growth of leaves and plants is delayed.

Sulfur, common in nature, plants may lack. There is little of it in the air and water, and in the soil it is often in a form inaccessible to plants. For this reason, sulfur, like many other elements, must be supplied to plants themselves.

Toak enrich the soil with sulfur

Sulfur can become available to plants only after it turns into a sulfurous form, which takes a long time and requires suitable environmental conditions (for example, humidity, temperature).

Allows to enrich the soil sulfur compounds are easily accessible to plants, Systematic introduction of organic fertilizers into the substrate, such as compost, manure or siderates, rich in decomposed plant residues sulfur is the most common. If the soil is regularly enriched with organic fertilizers for many years, its structure improves and the number of nutrients, including sulfur, increases.

While many new types of fungicides are now available for purchase, experienced gardeners and gardeners prefer to treat their plants with a proven and safe cumulus.

Natural fertilizers based on herbs

Eggplant: tips for growing, care and use

Snapdragon: planting and care in the open field