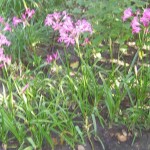 Nerin – bulky perennial. Late period of flowering from September to November makes it interesting for gardeners. Lily launches beautiful umbrellas with flowers, and this is a real sight. With its elegant flowers, they decorate the balcony and the terrace even at the end of the year. This is a beautiful perennial plant can be combined on a garden with other late weighing plants. 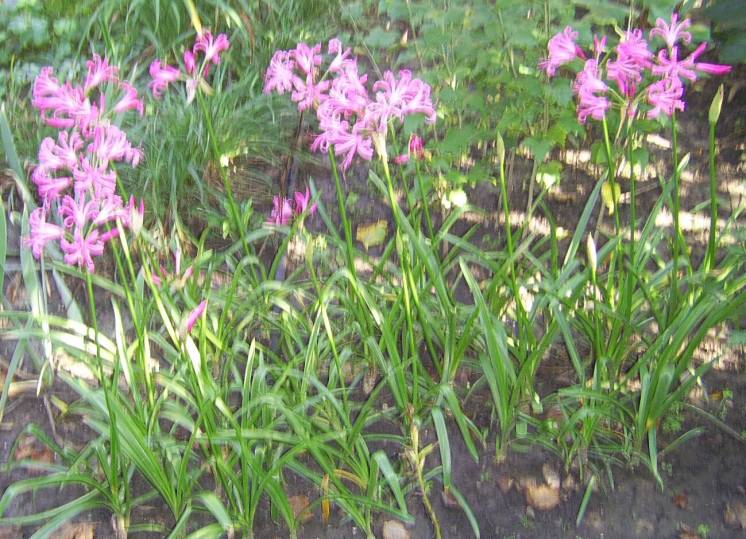 Lilia Nerin or Guernsey (Nerine Bowdenii) from the Amarylline family (amaryllidaceae) grows in South Africa, which grows in stony mountain landscapes at an altitude of up to 3000 meters. In our conditions, you can keep it in a pot on the balcony or terrace, put in the garden. The local climate is crucial for cultivation in the garden, since Nerin is only partially frost-resistant.

Plant height from 30 to 80 cm. Depending on the variety. Leaves from 20 to 30 centimeters long. Rhizome resembles an elongated bulb. From the bulb, three to five centimeters thick, a long stem sprouts on which inflorescences appear.

Flowers resemble lilies – therefore they are called “Guernsey Lily”. Flowers in umbrellas are sitting on a long naked trunk, and they are much tender than the flowers of real lilies. The stem is up to twelve individual flowers. The petals of them are slightly wavy, the ends are elegantly bent back so that the stamens are visible.

More often is a lily with pink or white petals. 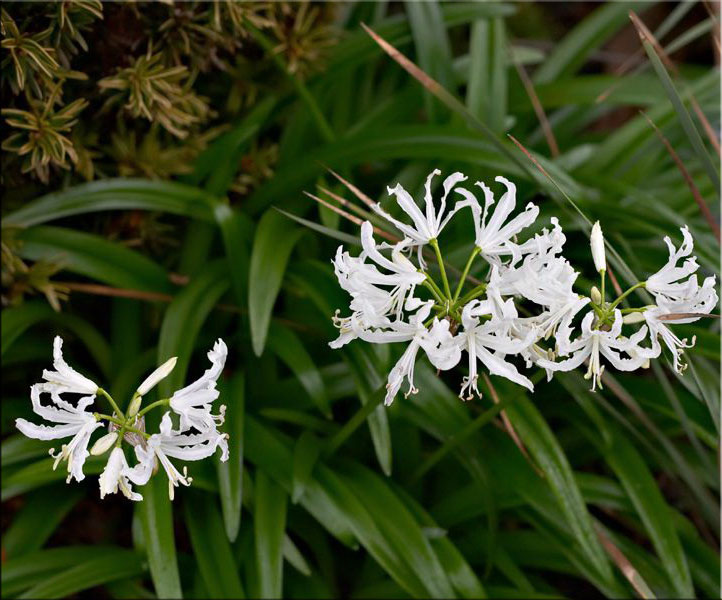 Flowers make a heavy, but pleasant smell. Exquisite flowering lasts from September to November, depending on the region and the softness of the late season.

Long narrow leaves are preserved all winter and spring, during this time the plant replenishes its stocks in a bulb. During the period of rest – at the beginning of summer, foliage dry out. Some varieties retain them and in the summer, but the plant does not show any signs of growth.

About thirty species are known, two of which are widely cultivated: N. Bowdenii and N. Sarniensis.R. Most often meets Nerina Bowden. Nerine Bowdenii blooms in autumn, and can simultaneously throw out several inflorescences. Plant type during flowering beautiful. After flowering, small capsules with seeds are formed.

How to plant how to water Nerine during flowering

and maintain this beautiful perennial?

Care for Lilia Guernsey is not complicated. The vegetation period of Nerine begins with flowering at the end of summer or at the beginning of autumn. During flowering, which can last 3 months, leaves begin to develop.

For container planting, small containers are chosen – flowering will be faster.

Lily in the pot

In a pot of diameter of about thirty centimeters, several bulbs can be placed at once.

Additional information!spending season on the street, pot return to a bright room, greenhouse or on a veranda, as soon as frosts threaten the plant.

Nerin is not demanding, it is easy to grow. It is especially easy to grow in a pot and does not require much care. It is better withstanding a colder climate (but not frost) than heat.

How to water Nerin at home? Watering the plant should be systematically, not allowing wetting. From the cluster in the soil of excessive moisture of the bulb begin to rot, which leads to the death of the plant. When the plant blooms, it must be watered more so that it does not have drought. During the rest of the bow contains dry.

The plant loves a well-lit place, but perfectly tolerates the half. Lilia Guernsey prefers a protected, warm and sunny place both in a pot and in the garden.

It blooms plentifully, and if there is a danger of frosts, you can simply move the plant in the premises in the winter. Grow in winter as a houseplant. Thus, this plant is in the growing season all winter before July, when the yellowing of the leaves marks the beginning of the recreation season.

The land should be lightweight, well-drained and sufficiently saturated. A small amount of sand is added to the heavy soil to facilitate and improve its drainage, since Lilia Guernsey does not tolerate wet substrates during growth.

Fertilizers also depends on the season. During flowering, it is necessary to feed the liquid complex fertilizer, which is gradually added to water for watering. Do it you need once every 15-20 days. Specialized fertilizer for bulbous plants can be used.

During the resting phase, watering and fertilizer are not used. When the first leaves appear, they begin to quietly feed and water. During flowering, it is plentifully watered, and the plant in a pot fertilize with floral fertilizers once a week. Compost provides a sufficient amount of nutrients on the garden.

When and how to plant Nenin? Save bulbs in April or Mai Shallow, leaving tips on the same level. The cervix should perform a little from the soil. Landing can be thick – between the bulbs leave a distance of 10 cm.

Please note!It is advisable to plant Nerine in small groups, including in pots so that they can turn with several floral stems. 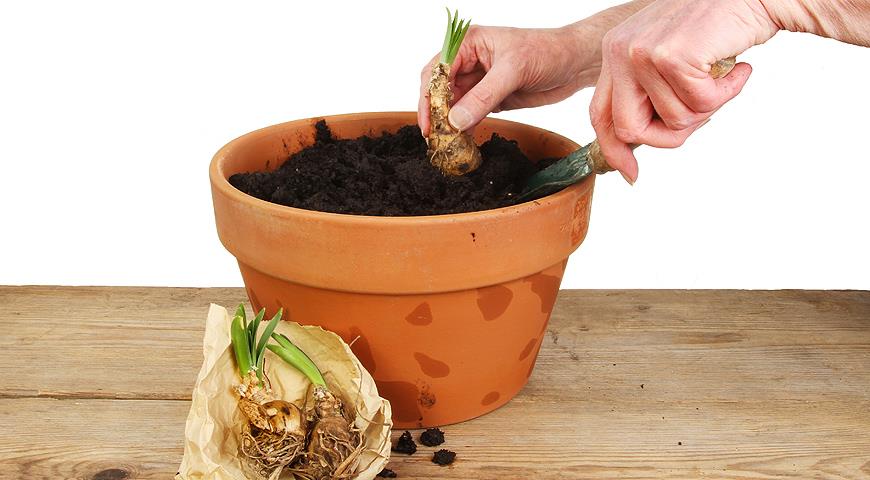 After rooting, the onions should not often transplant the plant sensitively to this. It is better to change the top layer of the Earth every year. Once every 3-5 years, the bulbs are transplanted.

How to propagate Nerin?

It breeds seeds and subsidiaries. The cultivation of the plant from seeds is a complex and time-consuming process. Plants do not bloom for a very long time, and it can only be bloated after 6 years of cultivation. In most cases, another fit method is used. The plant is multiplied by the children’s bulbs that grow around the main bulb of the mother. In the spring, the “kids” separate when transplanting them separately, to admire beautiful bloom after three years.

Please note!Seeds are designed for sowing immediately after they are released from fruits, and immediately bury into wet soil.

The bulbs are easily divided. They make it early in spring, in the period from March to April, and transplant to another place in the garden. At home, it is recommended to transplant the flower every year, because the reproduction of the root system reduces the likelihood of flowering.

Nerin blew what to do next? The plant is not sufficiently resistant to frozen. The bulbs almost uncount temperatures above 15 ° C, and this is in very good conditions: drained soil, growing in a moderate climate.

The thick layer of leaves or twigs in the garden is needed as protection in winter, but unfortunately, this is not always enough in the harsh winter. So in the harsh regions, where the temperature drops below 10 ° C, it is preferable to plant in pots.

Problems with diseases or pests rarely occur. If the bow is too wet, the root rot. In the garden, the snail nibble only that sprouted leaves.

No particular parasites should not be fear, but milders can appear on container cultures. The virus is also widespread, causing yellow spots on the leaves and bad vegetation. Such plants are thrown out.

Most of the available varieties are Nerine Bowdenii and Nerine Sarniensis hybrids. Several species and varieties: 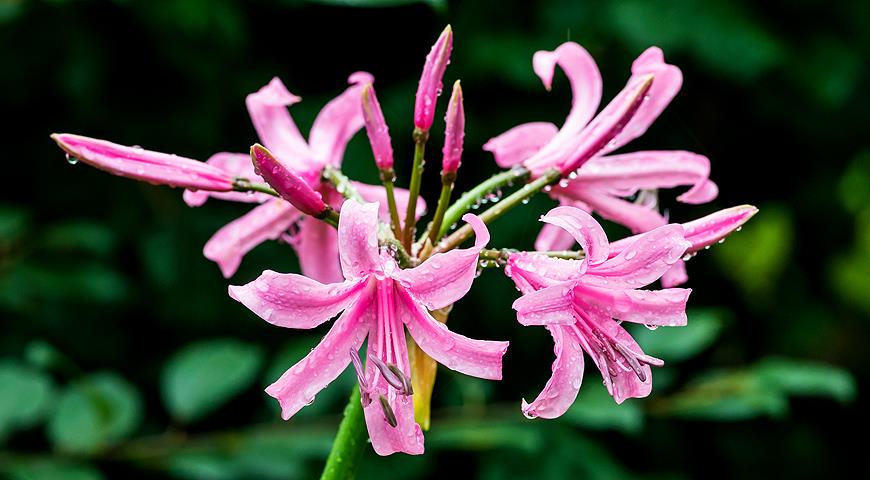 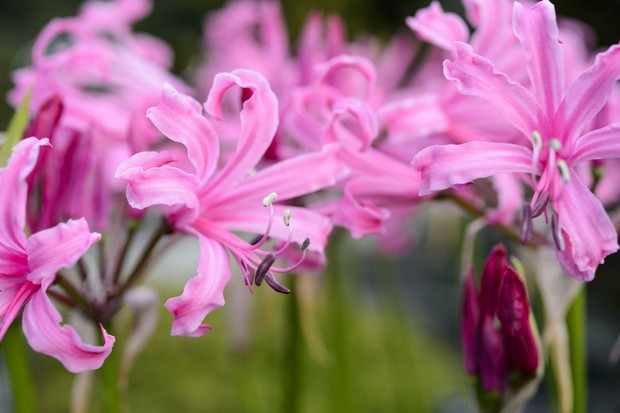 Lilyehy-like flowers Nerin –Present spectacle in the garden. Different colors can be combined with each other. The plant is in the cut, which can be stored in a vase for up to three weeks.