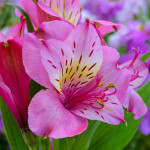 Astramerii or alstroemeria – a perennial herb very similar to lilies and daylilies. The flowers are incredibly beautiful and very popular. Properly caring for them, you can enjoy their bright blooms.

The origin and characteristics of the plants

Alstroemeria flowers – the family Amaryllidaceae, native to South America. Swedish botanist Clas Alstroemeria discovered this exotic plant in his travels to Chile in the 18th century and brought it to Europe. Over the years there were various kinds of reproduction. Of the known 60 species, some are suitable for breeding and rearing at home.

A large number of hybrids have been derived from several species, especially of Alstroemeria aurea. How does Alstroemeria? Today we know many hybrids with white, yellow, orange, pink, brown or red flowers. Flowers astralmerii a length of 10 cm with the characteristic points, dashes and stripes.

In contrast to the other plants of this family, alstroemeria have no bulb, and tuberous roots. The leaves are narrow, lanceolate, light green. Solid stem can have a height of 50-100 cm. Under natural conditions, they bloom in summer (June-July). Popular for cut flowers appear on almost all year round market. They are well tolerated in transportation, and long remain fresh.

Alstroemeria planting and care in the open field

Flowers can be grown in the garden as a perennial plant or plant in the greenhouse or in containers. It is best suited as a pot plant.

In the garden, they need a warm and light place, protected from the sun or light shade. Suitable friable soil rich in nutrients. Permeable soil, should not be dry, but not wet.

If the site heavy soils, they can add a small amount of sand to make the soil more friable. Heavy soils are unsuitable for alstroemeria, because they can lead to waterlogging, and this is unacceptable! Excess moisture can rot the roots of the flower, which will inevitably lead to his death.

Good lighting contributes to the successful flowering, but the soil overheating can affect the formation of stems. When the soil temperature is higher than + 23 ° C, the plant will rapidly build up the root system. This is useful if you need to get a bush for further division. Protecting the earth from overheating helps.

Fertilization must be frequently (three times a month). You can use both mineral and organic fertilizing. From the beginning of the growing season and until the kidney is preferred potash fertilizer with a high nitrogen content. During flowering, reduced nitrogen content, and the phosphorus content increases.

Watering is necessary only when the soil is dry, to avoid waterlogging.

Note!To ensure that it is desirable to re-bloom neatly cut all the old shoots. This encourages new shoots, which will cause new blooms

Astramerii grown in containers in a similar way.

The most popular varieties, the main of which were artificially bred breeders. The original color of chrysanthemums was orange-red, but now the Dutch companies continue breeding. The most popular color – pink.

All new varieties are the result of a complex crossing.

The plant can reproduce in two ways: by seeds and division of rhizomes. Propagation by seed is only suitable for the species because hybrids can lose the properties of parent plants.

The method of cultivation of seed growers recommend first to grow seedlings. However, the seeds can be planted directly into the ground in the open fresh air.

alstroemeria seeds can be collected independently. In plants they are formed in pods and can be collected after when ripe. At the slightest touch to the shell, the seeds scatter in all directions. Before collecting the seeds of the plant must be covered with gauze.

Sowing the seeds for seedlings should begin in early March. The seeds germinated at a temperature of 18 ° C. Their germination may take 14 to 21 days. Suitable for planting soil mix, to which is added 1/3 of sand. Seedlings should slowly get used to the climatic conditions outdoors. Gradually, from time to time they put on the street. When the seedlings will be the right size, being careful not to damage the sensitive roots, it can be planted in the garden. They bloom only on the second or third year after planting. The seedlings are planted at a distance of 30 cm and a depth of 15-20 cm.

The division of rhizomes

The most effective and simplest is the multiplication by division of rhizomes. Reproduction of tubers must take place in the spring. The advantage of this simple technique is that it is also suitable for hybrids. All new plants retain maternal characteristics. Plant carefully dig out, so as not to damage the roots, and then divided into 2-3 parts. Each part must be the root system.

Every 4-5 years, it is necessary to transplant Alstroemeria by dividing rhizomes, because the weak shoots will not bloom.

Note!Transplant important for potted plants, as Alstroemeria has many roots.

Some species are considered hardy, but they also need to be protected from frost and cold outdoors. Therefore, at the beginning of the cold season, the plants should be covered with a thick layer of leaves or straw, because it is too heavy frost (- 15 degrees), can damage the sensitive roots. If weather conditions are too extreme, it makes sense to dig up the rhizomes and store them in the winter in a cool room at a temperature of 10 to 15 degrees.

Container plants should also be carried in the house, so they spent the winter in a frost free area. Wilted leaves should be removed and tubers watered every 2 weeks or at least to keep the soil moderately moist.

Spring, after cold, the tubers are placed at a depth of 20 to 25 cm on the prepared beds.

Especially when Alstroemeria is still very young, it is exposed to harmful influences from the outside. In a very warm and wet seasons gray mold is formed, which is much of unsightly gray-white coating on the leaves. It is important to protect the plant against moisture and rain and to strengthen its organic fertilizers.

Red spider mites, aphids and Alstroemeria prefers. Spraying infusion nettle horsetail or can be an effective measure to combat. In most cases, also helps flushing them with water. As a preventive measure can be put next to the garlic.

Important!Infected plants should be isolated and treated with plant protection products.

Discolored or slightly deformed leaves and flowers usually indicate a viral or fungal infection. The plant should be removed as soon as possible to prevent it from spreading to other plants.

Alstroemeria not only decorates with terrace or in the garden, but it is beautiful as cut flowers. They can maintain the freshness in the vase up to a month or more.

The plant feels comfortable in the garden next to the grass, thistles, or sage. They all have the same requirements to the location. It is better to put them in small groups, maintaining the distance from the landing 30 to 50 centimeters.