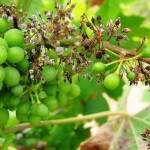 Unfortunately, the vines are common diseases that they are infected by pathogens: fungi, bacteria, viruses. Grape harvest and, in some cases, the plant itself can be jeopardized. To the vineyard was healthy and gave a good crop, you need to take care of him, to carry out prevention of diseases of grapes, if necessary, and their treatment.

The most common disease of grapes

The main causes of diseases of grapes may be hail, wind, drought, lack of heat, lack of breathability, excessive acidity or alkalinity, soil salinization and more.

Note!The vine is most susceptible to fungal diseases, which manifest themselves in a more humid weather and lack of air circulation. Bacterial and viral infections or diseases caused by pests, are less common.

Powdery mildew– One of the most common diseases of vines. The cause of powdery mildew on the grapevine is mildew Uncinula necator, forming them gray-white coating resembling spilled flour.

It can appear on the vines in May, wintered in the little eyes vines. From this primary infection, there are secondary (conidia), which hit all the green parts of the plant, especially unripe grapes.

The infected parts of the plants are covered with fungus from white to gray. The most susceptible to the disease vine after flowering, higher temperatures (24-28 ° C) and humidity (70-95%). The growth of the vine shoots is strongly suppressed. By fall, they become completely gray.

Mildew and young grapes, while the sugar content reaches 8% of them. If the infected fruit is not yet ripe, the skin can crack and dry. Thus, powdery mildew can ruin the whole crop.

Powdery mildew overwinters in dormant buds of the vine or in other parts, and as soon as the conditions for its growth in the spring are suitable, it gives a large number of spores that spread rapidly. Powdery mildew can be prevented if we select more resistant varieties, to ensure good air circulation by removing leaves around grapes and choosing a suitable form of growth. The fungicidal sprays by sulfur are also effective against powdery mildew.

Additional information!Winter frosts of -14 to -16 ° C well help against mildew on the vines.

Botrytis – gray moldis not less dangerous disease in the vineyard. It affects grapes during the ripening time.

Gray mold of grapes appears in rainy weather, when the grapes are subjected to mechanical damage of the fetus (degrees). Rot affects all aerial parts of the bush, it is most noticeable on the grapes. In particular, a layer of berries botrytis, which rapidly spread to other fruits.

Favorable time of illness – in August-September. What to do with mold on grapes? Aeration bushes, pruning and spraying and, of course, the choice of varieties of help from the mold. It is resistant to fungi to plant strong grape varieties such as “ester” or “Nero”. In case of severe infection after bud break in the spring, suitable processing sulfur colloid.

Lozhnomuchnistaya mold– a common and dangerous disease which appears in the vineyard. Downy mildew is caused by the fungal pathogen, as well as powdery mildew. 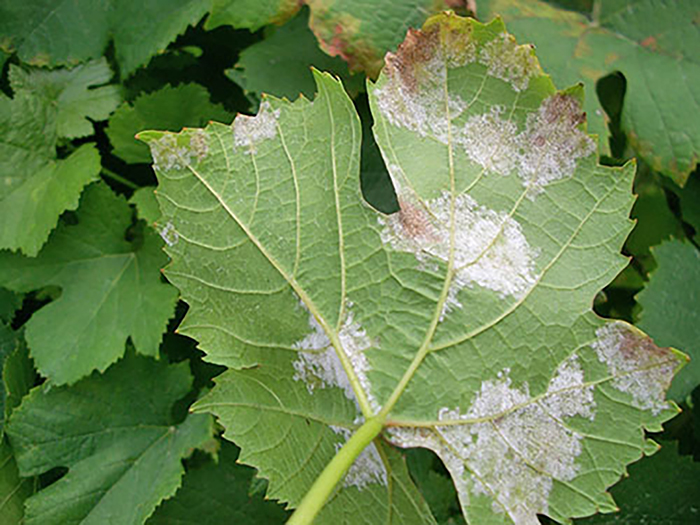 When the disease on the leaves of the vine appear yellow, then brown, oily stains. On the bottom side of the sheet, a white plaque. If the infection is strong, stain and fungal plaque can be seen on the tips of shoots, tendrils and inflorescences and young berries. The disease is rapidly developing. The spots gradually increase in diameter, and after a while the leaves turn brown grapes, wither in the fall.

Fungus overwinters in fallen leaves on the ground, especially strongly spreads in warm, humid weather. Wet weather contributes to the spread of the pathogen, so the fungus appears easy, especially when the vines are planted too thickly and often rains. To deal with it, carry out pruning and garter that grapes can dry quickly after rain.

Fusarium– a fungal disease of the vascular system of the vine, in which blood vessels become clogged plants. As a result, the plants dry out due to lack of water, nutrients and mycotoxin presence. 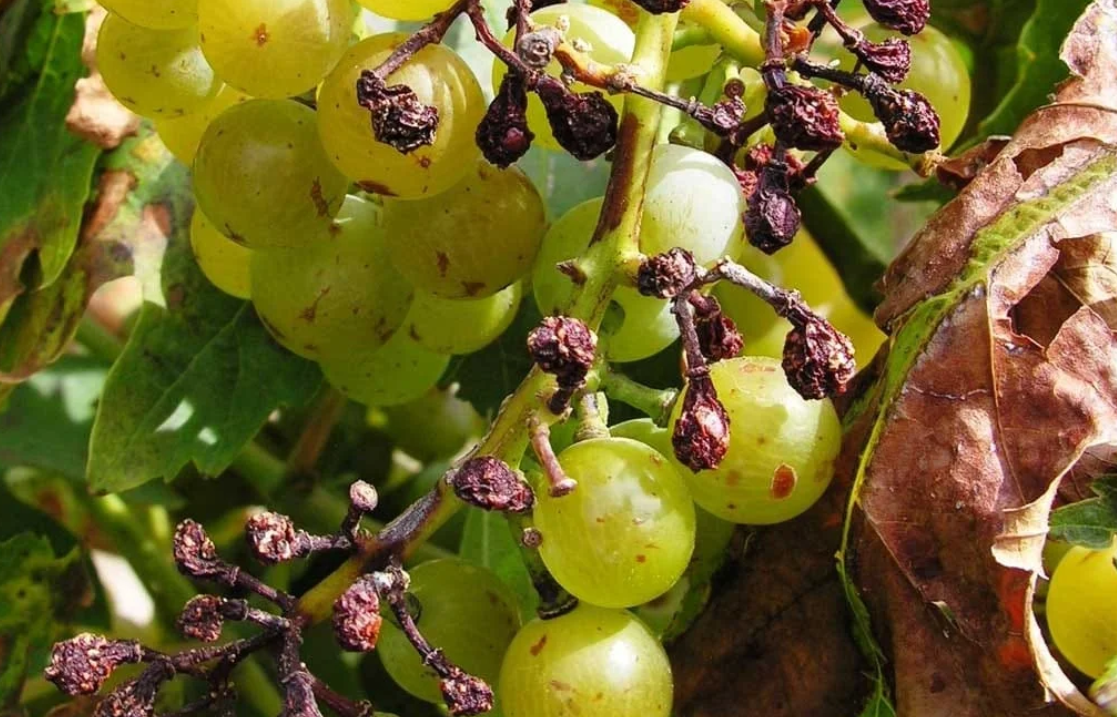 The growth of the vines during infection by the fungus Fusarium slowing, and even if the shoots grow, they wither and fade in a short time. Chemical protection of that fungal disease is unknown. Therefore only remove and burn all the plants, even the roots, so as not to infect other bushes. Also important is the disinfection of cutting tools when pruning the vine.

R. nigricans– this is a fungal disease that occurs on grape bunches after harvesting. Rizopov spores are commonly found in the air and in the soil. On berries appear watery light brown spots of irregular shape. In humid and warm conditions spread rapidly, producing a large number of spores.

Prevention of the disease is to remove the infected berries while collecting grapes in immediate use, and storing grapes without moisture and with sufficient air circulation.

Alternariaof grapes caused by the fungus Alternaria alternate. This fungal disease affecting many plants, including the vine leaves and bunches of grapes in the vineyard. First, on the edges of the leaves appear yellow spots, which gradually increase and turn brown, forming spots. Leaves are falling at a strong infection. On grape berries appear dark brown-purple spots.

The fungus Alternaria survives thanks disputes parts of dead plants and weeds. They are activated in a humid hot weather.

Important!Prevention of stains on the vine is to ensure good air circulation during the summer cut vines and removing dead leaves and dead plant parts. For prophylaxis may be used in a more publicly accessible fungicides wet period,

blackspot grapes(ekskorioz, suhorukavnost, Phomopsis). The cause of this disease is more cold and wet weather. Black spots can significantly reduce the number and quality of the crop and cause weakening of the vines. They can affect all parts of the vine, but they are most visible on the shoots and leaves. 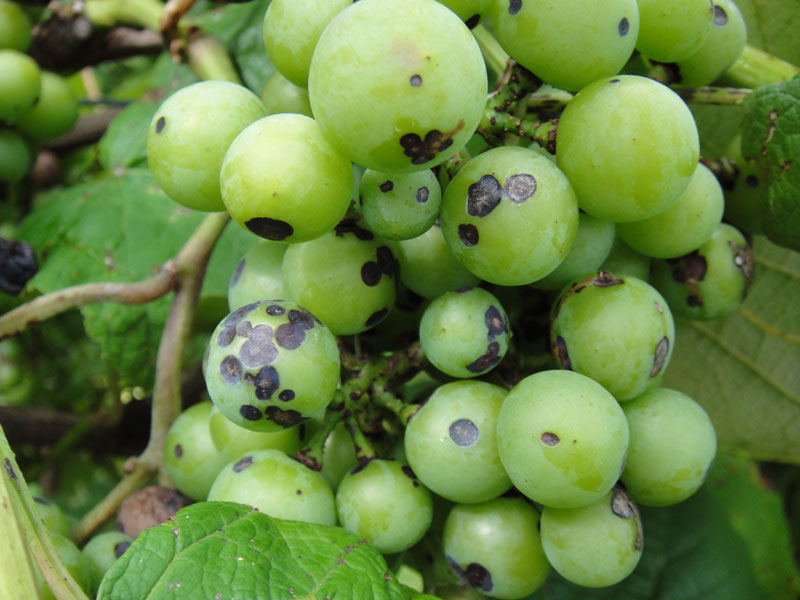 In the case of highly infected leaves fall off and shoots wither. Black spot affects and grapes, but it appears just before the maturation of grapes in a fruit rot. Fungus overwinters on infected areas of vine (most often in the eye of meat) and in the spring, with the arrival of rainy weather begins to spread by spores hit the young shoots. On the other hand, dry summer can stop the appearance of black spots.

Prevention in combating blackspot is to remove the diseased parts of the vine by trimming, to ensure a good air circulation around the plant, and selecting a dry place with a permeable soil for planting vine.

Evtipiozvines amazes wood of the vine. It is manifested mainly in the older (10 years or more) bushes. The causative agent of the disease is slowly spreading in the old wood and causes the premature death of plants. He hibernates in dead parts of the vine trunk, as well as in other plants (fruit trees), and with the arrival of wetter spring days begins to spread through the formation of spores carried by the wind.

Infected wood gradually darkens and dies. The shoots are small, with deformed leaves. Small bunches of grapes. The branches of the vine, or entire hives eventually die after a few years of infection.

Prevention of this disease is to remove the infected plants (whole vine) and potential sites and their subsequent burning. Chemical protection evtipioza not effective. 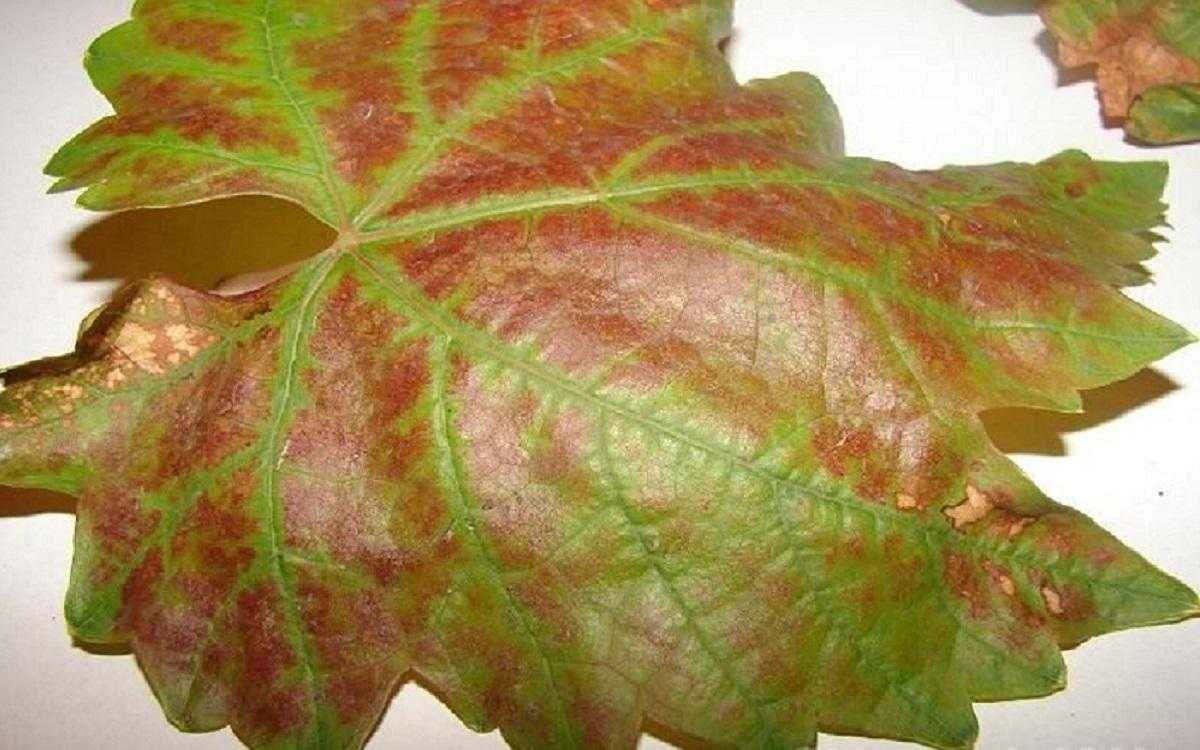 Red Spot grapes.Pathogen Pseudopeziza tracheiphila mainly affects the leaves, and in exceptional cases – inflorescence. On the leaves of the white varieties there are stains from yellow-green to yellow and red leaves on red varieties are produced, a different arrangement of veins. Spots are rapidly increasing. The leaves fall prematurely. At a higher degree of challenge (summer and early fall), and weakens the plant matures poorly grapes.

Red pathogen overwinters in fallen leaves. In the new season, after the arrival of wet weather once again wakes and begins to multiply disputes.

Prevention of burns red vine – removal of fallen leaves, which are the source of the disease. Copper fungicides are also effective against red fever.

Spotted anthracnose vine.This disease affects all parts of terrestrial plants. The disease is most actively spreading with showers and hail, causing mechanical damage. 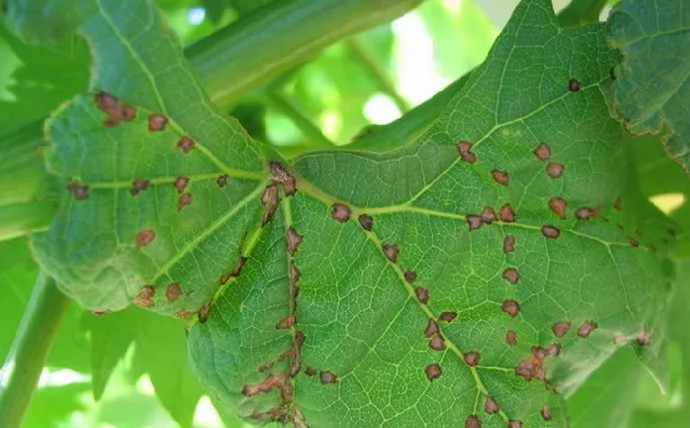 In infected leaves agent causes necrosis in the form of round spots of 1-5 mm in diameter, surrounded by brown-black border. Affected buds and fruits are colored dark purple rim. The affected part of the grapes are deformed and become very brittle.

Tips for prevention of diseases of grapes

One of the goals of the gardener – to reduce the number of fungicide sprays while maintaining or even increasing the yield in the fight against diseases of vineyards.

A suitable place for growing with a lot of sun, the circulation of air, soil and water-permeable resilient vine grapes reduce disease.

Roses in the garden landscaping

Growing peppers. From seed to harvest

Spatilulum. Excellent air purifier, how to grow it?

Secret of healthy and beautiful roses