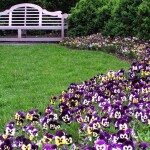 Garden pansies are popular perennials for growing in containers, hanging baskets, on flower beds and borders. Thanks to the impressive flowering, these are the most common ornamental plants. Abundant flowering begins from mid-spring to early autumn. 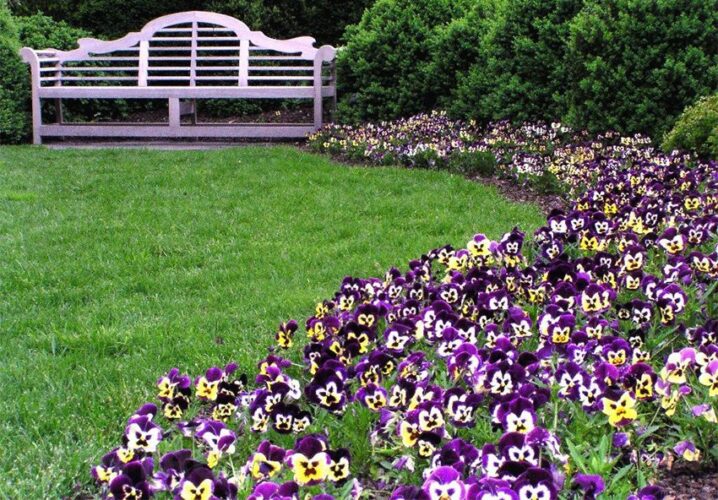 The scientific name of pansies is Viola tricolor, and they belong to the Violaceae family, which includes about 1000 plant species. They are also called “garden violet”, or “viola”.

The plant is a perennial, but their life expectancy is no more than two years. After a while they become unsightly, and they should be replaced with new plants.

A herbaceous plant with low and dense growth reaches a height of 15-20 cm . The leaves are heart-shaped, and the flowers have a special decorative value. They are located on erect petioles. The flower consists of five wide petals 5-10 cm in diameter.

There are hundreds of species and varieties of pansies with different colors with a mixture of shades, large or small flowers and characteristic spots on the petals. In addition, there are monochrome varieties.

Special ones with large flowers, which have a black spot in the center. Varieties of pansies with smaller flowers are more used as groundcover, as they are more resistant to adverse weather conditions.

Pansies are flowers that are easy to grow. They love sunny places, but they feel great in partial shade. In the shade, they give a lot of leaves and few flowers. They grow on all soils, but prefer those that are rich in organic substances and well drained.

How often are pansies watered?

Violets have a superficial root system and need regular watering for lush flowering. They like humidity, but not waterlogging.

Pay attention! In heat and drought, they should be watered regularly, avoiding waterlogging. The substrate should always be moist, if possible, but not wet. Approximately watered 2 times a week in the spring and autumn period, and every 2 days in the hot summer period.

Viola pansies have a need for nutrients, and need frequent fertilization to bloom for a long time. A complete granular fertilizer rich in nitrogen, phosphorus and potassium is applied once a month from early spring to mid-autumn.

To help the plant to renew and give a new bloom, remove the flowers after they ripen.

The violet is propagated by seeds, cuttings, and division of the plant. After flowering, fruits with seeds appear. The seeds are very small, and they must be collected before opening the box. Plants can reproduce by themselves if the flowers are not cut. The seeds crumble, and new plant specimens grow out of them.

How to plant pansies with seeds

You can grow new pansies plants from seeds at home. The suitable temperature for seed germination is about 20 ° C.

They are transplanted into the open ground or into a container when the seedlings take root and release at least 2-3 leaves. The transplant must be carried out in wells to a depth of several cm, a distance of 10-15 cm from each other. In addition, you can sow seeds directly into the ground in early spring or early autumn.

Propagation of pansies by cuttings. For propagation by cuttings in late summer or autumn, take a part of the stem (stalk) about 10 cm long from the base of the plant. Cuttings are planted in seedling pots with a soil mixture, and kept in a cool place. New plants take root after 5-6 weeks.

Division of the plant. The perennial pansies are propagated by dividing into 2-3 parts so that there is a shoot and a root on each part. A separate piece is planted in soil enriched with nutrients. After 4-5 weeks, new plants are formed.

Often, where pansies grow, new plants appear the next year from seeds that have fallen to the ground.

Viola, sown in spring, will bloom next year. It is possible to achieve summer flowering this year if you prepare seedlings that are grown in planting boxes.

At the beginning of March, seeds are pre-germinated in trays to plant them in the garden at the end of May. The container is covered with a transparent plastic film, and put in a dark place with a constant temperature of about 18 ° C before germination. The first shoots appear about 10 days after sowing.

Pansies landing in the open ground

Planting in late summer and early autumn is ideal, as pansies will have time to take root before winter. The seeds are sown in the open ground, adding a little well-rotted garden compost to improve the soil.

Additional information! Grown seedlings can be left for the winter as perennials, having previously protected them from the cold.  They will bloom in the spring. If the violet seeds are sown in late May – early June, the buds will open by September.

Diseases and pests of pansies

Pansies are a relatively hardy plant, and it doesn’t have many problems with diseases and insects.

Spots on the leaves of pansies can be caused by fungal diseases. They suffer from root rot caused by stagnation of water.

If you notice spots on the leaves of pansies, tear them off and throw them in the trash. Avoid growing pansies in the same place next year, as the fungus spores can survive in the soil.

In this case, they are sprayed with a copper preparation, which is bought in a specialized store. We can use a home remedy by dissolving 1 tablespoon of baking soda in a liter of water.

Pansies are afraid of attacks by black aphids and whiteflies. The most tender shoots and leaves are severely damaged by snails.

Pansies may not bloom if they are planted in a shaded place or in strong sunlight. Flowering can be reduced if watered more or when excessive amounts of nitrogen fertilizers are added. Nitrogen fertilizers promote the growth of green mass, significantly limiting the flowering of the plant. 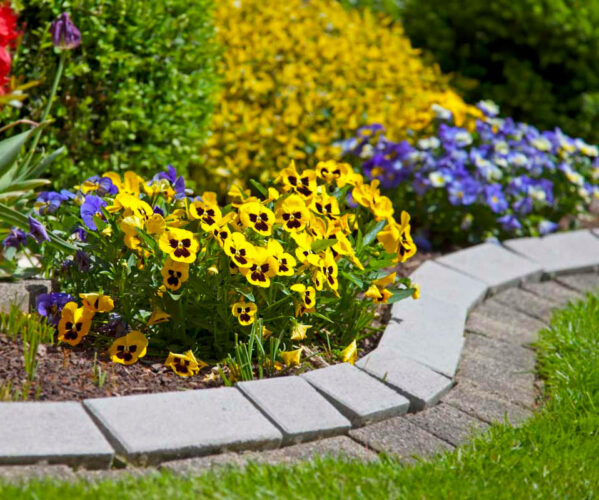 By planting pansies in one or two rows, you can create beautiful flower borders with lawns and fences. They can be combined with herbaceous plants, as well as with bulbous ones, such as tulips and daffodils.

Natural fertilizers based on herbs

The use of sulfur in horticulture

Eggplant: tips for growing, care and use