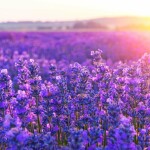 Lavender – a small shrub known since ancient times as an aromatic plant. Her grown for thousands of years for its special flavor, as well as soothing and antiseptic properties. Shrub with beautiful flowers of different colors (blue, purple, pink, white). Hardy and easy to maintain plant is widely used not only in medicine, but in the cosmetics and food industry.

Flower lavender (Lavandula) – genus of Labiatae family of plants comes from the sunny Mediterranean. In the process of evolution and breeding culture adapted to more severe climatic conditions. Adult plants can withstand temperatures down to -30 ° C. Its resistance to various thermal conditions makes it suitable for cultivation in any territory. Wild plant is found in the south of France, in the coastal Alps, eastern Spain, Italy and North Africa.

Typically, the silver-green leaves, but there is also a green or silvery leaves. Culture reaches maturity in 2-5 years and can live 40-50 years without any problems.

The cultivation of lavender. Where lavender grows?

Lavender – a relatively hardy perennial, so it is not difficult to grow. Light-requiring culture does not tolerate shade, so it is advisable to plant it in a sunny spot in the garden.

Additional information!Sunlight helps the plant to accumulate more than the essential oil in the flowers. High humidity during flowering degrades the quality of the oil.

The most important factor in the successful cultivation of lavender is a well-drained soil. Do not tolerate excessive moisture of the soil. Permeable soil from which excess water is drained immediately to protect against root rot and freezing point of water at the roots in winter.

It is important to know when to plant lavender. For optimal landing its spring: soil gradually heated and has a sufficient amount of moisture. Autumn is also the alternative to planting lavender, but it is especially true for larger plants which can already get through the winter. In the case of landing lavender flower pot, it can be planted throughout the growing period.

Dry, no wetlands are suitable for planting. Heavy clay soil in the garden, before planting mixed with sand or other permeable material. A mixture of sand or vermiculite to horticultural substrate is ideal.

The primer should be neutral or weakly alkaline (in acidic soils lavender is not very good taking root).

Lavender planted at a large distance (0.5 – 1 m.), Because some varieties grow up to a meter in height and width. Prepare the planting hole twice as deeper and wider than the root system of the bush, put into it a seedling and covered with soil, compacted and watered abundantly. Then watered once a week until the plants take root. Subsequently to be enough water from rainfall.

The plant is highly resistant to drought and does not require additional nutrient soil to thrive. Ideal lavender fertilize once a year, always in the early spring.

The plant likes dry patches, and a temporary lack of water will not cause too many difficulties in development. Yellow leaves – a sign that too much water. Therefore, better to wait until the soil is dry, and then pour the lavender.

When the plant is rooted already it is sufficient water from precipitation and require no maintenance other than periodic trimming flower stems just after flowering.

If the crop plants before planting into the soil to provide better air circulation around the stem, and in that same time supported by the growth of new shoots. Trimmed bushes once a year, preferably in the spring, before the beginning of the flowering season. It is recommended to remove about 1/3 of the shoots.

It is recommended to prune the bushes to keep them compact and stimulate healthy growth and branching. If you cut the flower stalks after the first bloom they will bloom again. Second flowering flowers fewer in number, approximately half of the first flowering.

Note!Pruning in the fall stimulates the growth of new shoots that will freeze in the winter.

There are two ways of reproduction of this shrub: seeds or cuttings. Seed propagation – a relatively simple process, but for which certain conditions must be met.

Seed germination occurs only at a temperature of from 18 to 22 degrees. The seeds should be covered with a thin layer of soil and watered regularly until the first sprouts. Plants derived from zornyshek, usually bloom the second year.

The easiest way to breeding lavender – it slips. Propagated by cuttings, selected with strong healthy plants. Young and old woody stems are suitable for cultivation. The advantage of the young cuttings is that the use of them in large numbers in the spring, does not violate the mother plant. They quickly take root, but not as reliable as the old, woody cuttings. They should be healthy, and without flower buds that are unnecessarily deplete them. The length of the old and the young cuttings must be between 7 and 10 cm. After removing the lower leaves should be placed in the substrate and pour the warm water.

For planting a mixture of perlite, vermiculite or sand and peat (50:50). After rooting seedlings are transplanted to a permanent place in the garden or in a pot.

Lavender has sedative and analgesic properties. Thanks to its flavor is successfully coping with nervousness, stress, insomnia, headaches, palpitations.

Widespread use is associated with lavender essential oil, which is extracted from the flowers. First of all it has a strong antibacterial activity against Streptococcus, fungi and viruses, and is one of the most effective methods for treatment of purulent wounds and inflammation. Used for burns – both household and solar.

Lavender oil is one of the most valuable ingredients in cosmetics and perfumes. Lavender flowers can be used in the kitchen. Lavender – an unusual spice, but goes well with desserts and other dishes.

Dried lavender is used for the preparation of herbal teas and lavender pillows. Lavender tea can be made from 2 teaspoons of flower: it calms, helps with problems with sleep, acts against bloating and stomach disorders of nervous origin, relieves headaches and stomach cramps.

Can be used in the bath lavender (dried herb or lavender oil), make it a massage oil (add 4-5 drops of lavender oil in 10 ml of almond or jojoba, and store in a cool place) or aromatic lamp.

Lavender is also an insecticide for controlling insects. The essential oil not only soothes insect bites, but also is an effective defense against their attacks. Lavender flowers are widely used as an anti-moth and mosquitoes.

Culture used against land erosion. Reduced requirements for the soil make it suitable for cultivation in areas where it is impossible to grow the main field crops. Valuable honey plant.

Lavender planted rose bushes in front. It is resistant to pests, such as aphids, and thus will protect the rose. Lavender repels insects and ants, so the roses get rid of aphids and other insects that attack it.

Harvested when more than half opened flowers on the flower stems. Lavender harvest time comes the summer – from July to August, in the early blooming flowers begin to open when the lower flowers on the stem. While lavender has a more pronounced flavor. Cut only the woody stems.

After collecting the raw materials must be thoroughly dried. Dried flowers in the related beams, suspended in the shade in a well ventilated area, or throw thin layers in a shady and dry place.

Important!The stalks with inflorescences are cut and transported as quickly as possible for processing. The drying temperature should not exceed 35 degrees. Once lavender dry enough, it is stored in canvas or paper bags. The flowers do not lose their color even after drying.

Lavender can be stored for many months in a dry place, away from direct sunlight.

Lavender, as well as other plants may suffer from various diseases – viral or fungal herbicides against misuse and moisture retention in low places. Fungal diseases are caused by the gradual destruction of the whole plant, which is usually manifested in a white raid on the plant.

Due to the fact that Lavender is an aromatic plant pests are not very strongly attacked. Ants, aphids, mites repel its strong flavor.

Perennial plant can survive the winter. Before winter, you can hide the roots with straw or mulch to protect from frost.

Lavender and its species

The most famous and most commonly grown species in the garden is lavender (Lavandula angustifolia) and its varieties.

In nature, there are about 50 species, which are divided into 3 types:

Lavender can be used in different ways, but above all it looks great in the garden.